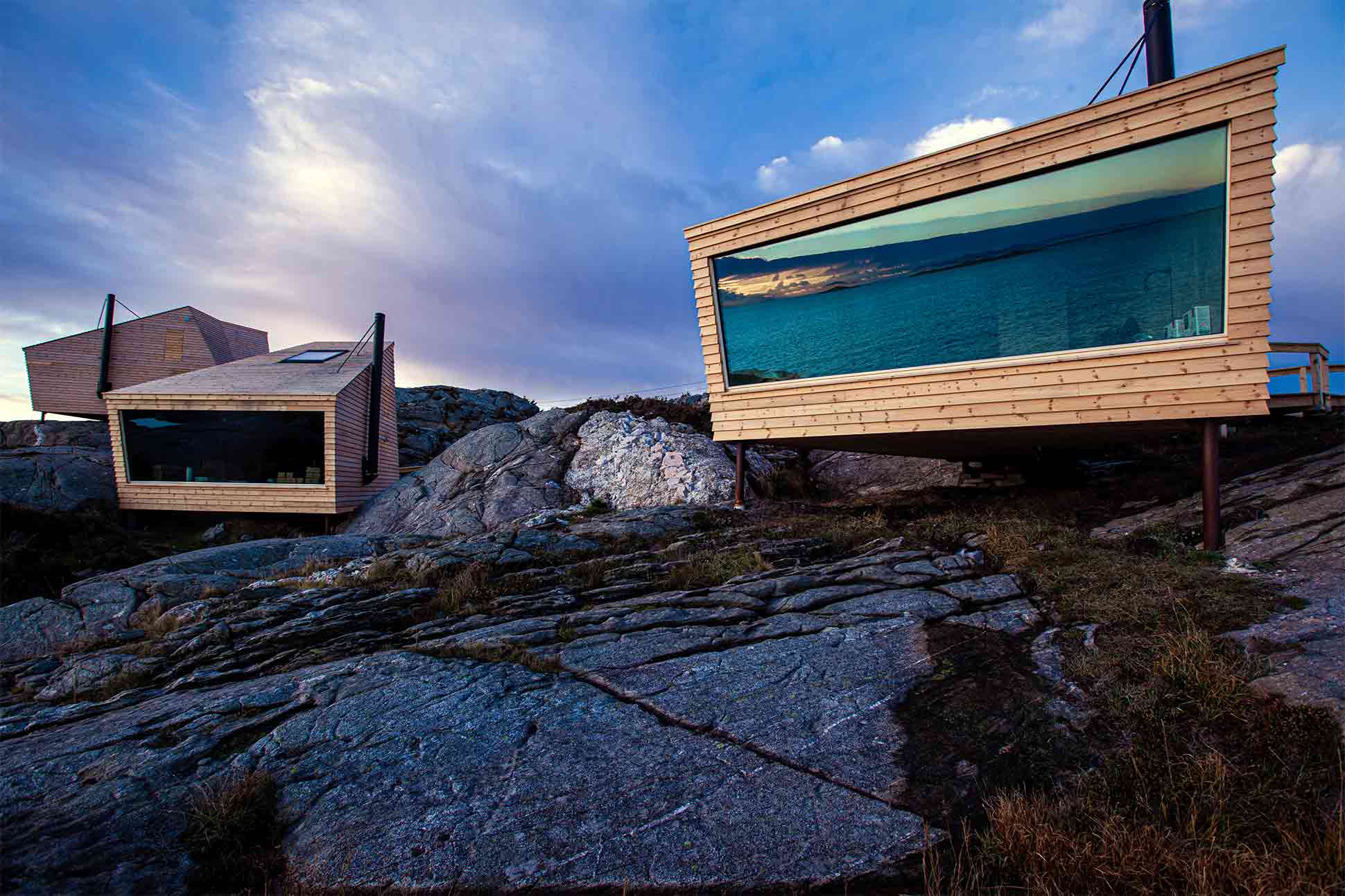 Tucked away among the treetops of pine forests or cantilevered above craggy slopes with uninterrupted views of icy fjords, a new generation of Norwegian escapist hideaways promises total immersion in nature. It’s luxury stripped back to the bare essentials, except the country’s designer cabins cut a seriously sharp figure.

Heard of friluftsliv yet? It’s the latest mood-in-a-word coming out of Scandinavia, and a logical successor to the concept of hygge. Though whereas hygge was all about a feeling of snuggly comfort, friluftsliv (‘open-air life’) reminds us of the benefits of stepping into the wild: it arrives just in time for those eager to embark on a post-pandemic adventure. And Norway sure has some of those up its Nordic sleeves.

Perhaps that’s why so many of the country’s new designer cabins boast floor-to-ceiling glass fronts and panoramic views of the surrounding landscapes. Take Flokehyttene, for one. Spread across five luxury cabins some 30 minutes from Haugesund, this seaside hideaway is a love letter to the elements, built on stilts anchored in coastal rock and facing the North Sea. Flokehyttene was created to offer 24/7 access to the elements from the base of your very own, minimalistic cocoon: imagine falling asleep to the song of piping winds and waking up the sound of waves crawling gently towards the shore.

It’s the kind of place that feels so out of the way, it stops just short of feeling out of this world – for us, it’s the sheer force of nature that left its traces on those ocean-shaped cliffs, that seals the deal. To avoid distraction from the surroundings, Flokehyttene’s design is ultra-sleek and non-assuming. The only truly dramatic element is the designer cabins’ sea-facing glass facade, but then again, they’re a striking way to frame the mighty environs just beyond (and we do love a little drama!).

There’s also Woodnest, near the city of Odda. Its two ultra-private treehouses overlooking pristine Hardanger fjord promise an utterly romantic stay in an intimate but cleverly designed space. That said, this nest comes with certain creature comforts such as heated floors, a kitchenette and a fridge for the bottle of champagne you’ll want to pop when you see a shooting star during a nightly stargazing session. The designer cabins’ size doesn’t feel like a compromise, either. It’s arguably the small scale (and the inherent hygge-ness), that facilitates a feeling of sleeping not simply surrounded by trees, but bedded comfortably among them. To top things off, Woodnest’s amenities remind us of a new-age office of some hip, new natural skincare brand – we wouldn’t mind hatching an egg here.

The Bolder Sky Lodges take a similar path, except they’ve gone for an extra dose of fabulous (think Karen & Jack, not Will & Grace). Both designer cabins boast two double-rooms, sharp-looking kitchens by Vipp, atmospheric light features and a glass box of a dining room offering sweeping views across the inky Lysefjord. From what we’ve seen, the lodges promise some of the most breathtaking vistas anywhere in Norway. And we would know; we used to vacation around the corner from here!

A word of advice, should you seek a thrill beyond your cabin in the sky: the nearby Preikestolen (‘pulpit rock’), an almost eerily perfect rock formation towering some 600m above the fjord, is a jaw-dropping sight that induces vertigo even in (some) Norwegians. We very vividly remember crawling up to its southern side on our bellies to look over the edge wide-eyed and weak-kneed, reaching out for our old man’s hand (we did mention this was a lifetime and a half ago, right?).

Some have said that Norway’s been a bit behind its Scandinavian neighbours in cultivating an image of Nordic cool. While the Danish capital of Copenhagen became a much-hyped gastro-destination in the early 2010s, and Sweden has gone to remarkable lengths advancing its sustainable tourism initiatives, Norway somewhat fell off the radar for some. But if the country’s ongoing trend towards escapist hideaways continues to grow, with designer cabins popping up alongside fjords and hidden among fragrant conifer forests, we predict it’s set for a bit of a revival in the 2020s. There certainly seems to be a distinctive interest in design-driven accommodation that maximises exposure to nature, and God knows the Norwegians aren’t running out of stunning landscapes anytime soon.