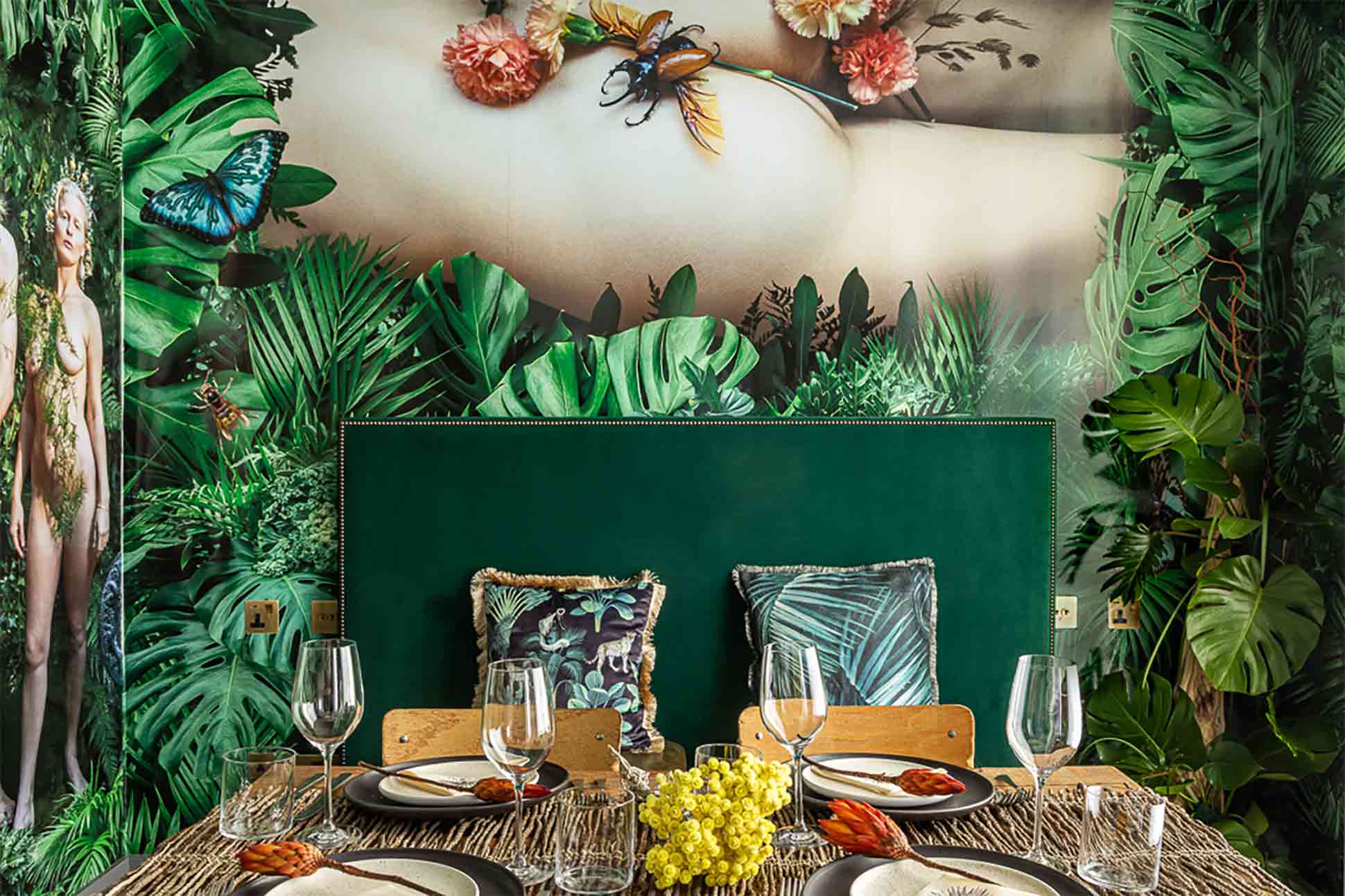 As one of London’s most eclectic hotels, The Mandrake has turned heads left, right and centre since opening in 2017. But the chic Fitzrovia property isn’t resting on its laurels. Instead, it’s just unveiled a number of private dining spaces customised by artists who share the hotel’s vision of holistic hedonism: The Mandrake artist cabanas.

There are only so many creative ideas you can bring to fruition within a single hotel. That’s what we thought until we checked into The Mandrake after it first opened. But coming face to face with the property’s penchant for all that’s whimsical and wonderful, we quickly realised this place was fearless, ambitious and perhaps a bit crazy – it made for such a lasting impression, we ended up checking back in for a fully-fledged photo shoot shortly after. And having gotten a peak at The Mandrake’s brand-new, artist-curated dining cabanas, we’re once more planning a staycation at our favourite Fitzrovia bolthole.

The cabanas were created within the framework of the hotel’s creed to stay ahead of the game and offer guests a new experience each time they visit. But rather than opting for just any novel idea, The Mandrake’s founder Rami Fustok tasked four of his personal favourite artists to create spaces that serve as a logical extension to the property’s Jurema restaurant while also functioning as distinctive spaces in and of themselves. Each cabana sits up to six guests in a private space just big enough for a triple date night or dinner for yourself and five of your imaginary boyfriends of the month (we’re not judging; this is a safe space).

So who got to work on the cabanas, you ask? For one, there’s Fustok’s mother, artist Bushra Fakhoury, whose ‘OSHUN’ concept pays tribute the way of life and ancient history of indigenous people. It’s an abundantly decorated and celebratory space bursting with references to cultural heritage and humans’ origin in the natural world. There’s also the Eden-esque ‘Paradis Perdu’ by photographer Iris Brosch, a sumptuous oasis referencing the story of Adam & Eve while simultaneously showing London the behind (Eve’s, we think, adorned with flowers and an earwig).

Meanwhile, a coral-coloured ‘Carnivorous Lady’ cabin by designer IT SPAIN tempts guests with a striking vision of femininity, contrasting curves that appear almost in motion with vibrant shades of fuchsia and forest green, and the Pookie Blezard-designed space, ‘Flores Sana’, speaks of the restorative forces of nature in an untamed and visually stimulating way. Personally, we might just opt for the latter when we book The Mandrake’s new Artisanal Experience package, though regardless of which space we end up dining in, we have a feeling we’re in a for a treat.

The thing with artist collaborations in the high-end hospitality sector is that in order to look like they belong, they need to do more than simply hang on a wall and look pretty. Too frequently do hotels rely on futuristic sculptures that grace lobbies and hallways, but are ultimately devoid of any meaning other than adding a layer of gloss and glamour. The Mandrake’s cabanas, on the other hand, don’t add as much to the property’s already extravagant flair as they extend it into its private spaces. By doing this, the hotel facilitates immersion within an actual work of art and encourages discourse about the themes depicted – creation, mythology, refuge in nature. You’d be forgiven if you forgot to look at the menu.

Photography courtesy of The Mandrake