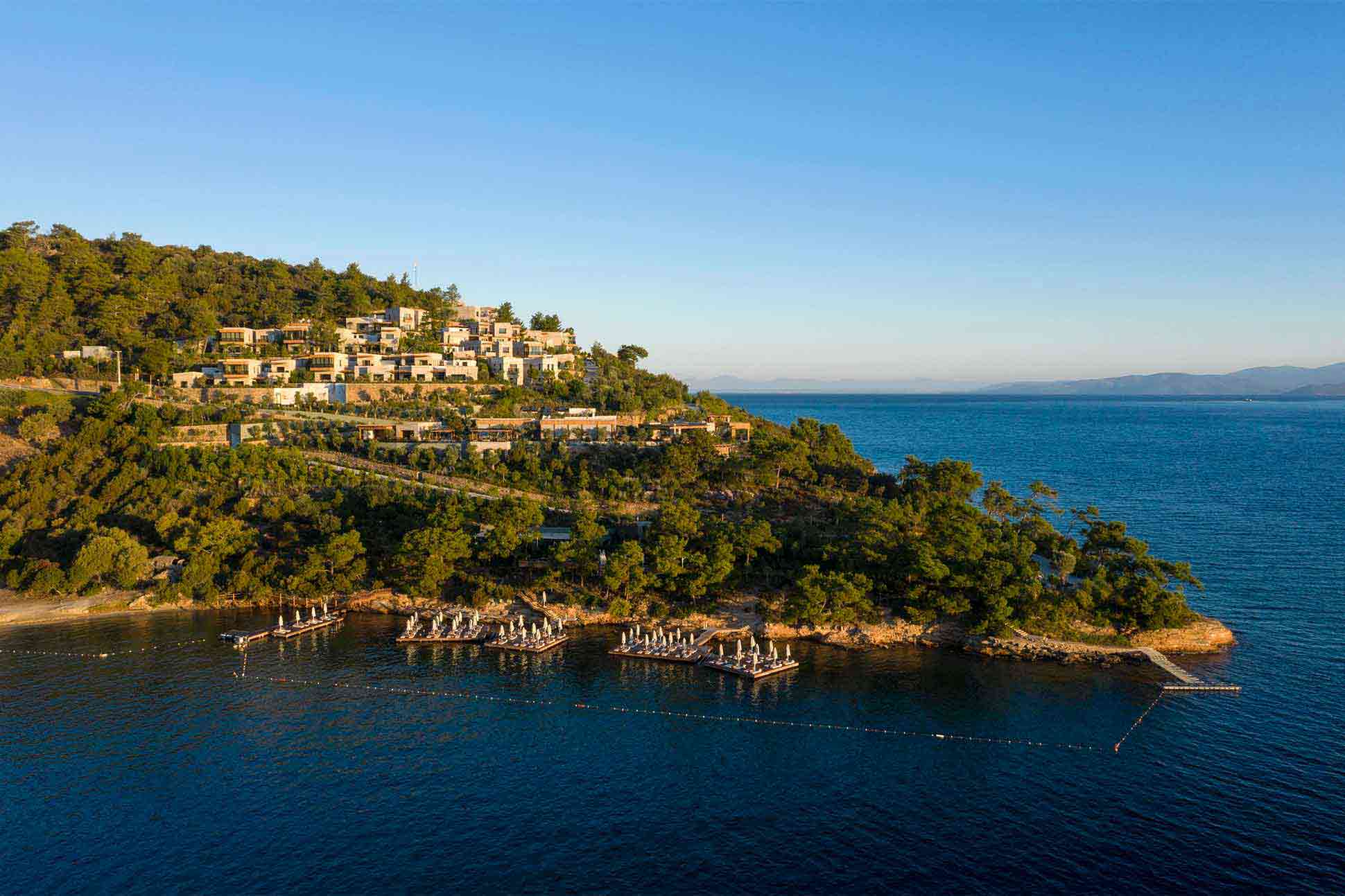 For years, Bodrum has lured enterprising hoteliers to its shores. But just as developments begin to threaten turning the Turkish peninsula into a Costa del Chaos, with sprawling resorts fighting for the prettiest spots along the coastline, a more intimate property camouflages into its fragrant forests: Bodrum Loft.

When Turkey announced that it would reopen its borders to international travellers, we got rather excited. There’s something about the ‘land of four seasons’ that we just don’t seem to find anywhere else – and no, we’re not talking about the rugs, spiced teas and affordable hair transplants (how dare you!). Rather, Turkey seems to come with its very own, unique climate; a feature the country no doubt owes to its location. Simultaneously western Asian and southeastern European, Turkey’s landscapes have been shaped by salty seas, arid soil and a mega-watt sun. On each visit, we fall in love a little more – with its pine forests, friendly locals and mezze platters.

Bodrum, arguably the country’s most popular resort destination, holds a special place in our hearts. And we’re not the only ones: the peninsula has long been a retreat for Europe’s go-go set, with royalty and rock stars arriving on their super-yachts to top up their tans and – God forbid – throw television sets overboard (though perhaps that’s just a cliché?). To offer a less glitzy and more thought-through experience of the destination, and, we’d like to imagine, shelter from the flashing lights, one hotel has decided to camouflage right into the surrounding terrain.

From afar, Bodrum Loft looks a bit like a bunch of minimalist cubes that fell from the sky, tumbled down a hill and nestled in between trees, evading a plunge into the Aegean Sea. While this can be said about many places, however, what’s remarkable about the hotel is that it evokes a sense of being in nature from up close, too: it’s impossible (no really, we tried!) to find a picture, even from deep within the Loft’s grounds, where the forest doesn’t seem to have invaded the property. Rather than building the resort on top of the surrounding landscape, it has been built into it with great care. It’s a move we attribute to the trend to ‘build back better’, which started before the days of Covid-19 and we predict will continue to thrive in the region.

None of this is to say that the actual hotel – as in, the buildings it’s made up of – hasn’t also been conceptualised with great attention to detail. 36 fully furnished two- to four-bedroom villas boast floor plans unique to each unit, hand-painted mosaics, original lighting features, walls made from local rocks and encased with a coating made using an ancient Aegean recipe of hay and olive oil. The ‘local theme’, courtesy of Istanbul-based Tabanlioglu Architects, continues throughout the property, from under-the-olive-trees dining at Loft Elia all the way down to the resort’s private beach. Those wanting to honour the outdoor lifestyle that has prevailed across Bodrum for centuries can look forward to open-air massage facilities and the Loft’s personal concierge who will delight in organising private yacht charters and the like.

With so much going for it, it’s perhaps not surprising that Loft Bodrum, which is set to open doors on 1 May, forms part of the elite Leading Hotels of the World. An even more laudable credential, however, is that the hotel is attempting to restore the kind of eco-friendly tourism that once came naturally to Bodrum, long before conscious travel became a buzzword. The kind that invites holidaymakers to benefit from and be inspired by nature at every turn, rather than looking out at it from an ultra-luxe but out-of-place palace built out of glass and steel. It’s exactly why it had to be so intimate in size – for reference, of the Loft’s 57,000 square-metre property, two-thirds remain pristine woods: sandalwood and citrus trees, laurel and cranberry shrubs. If none of these things float your boat, there are plenty of wonderful, large-scale resorts scattered across the peninsula and you won’t struggle to find the kind of big-name hotel with the see-and-be-seen vibe you know from other destinations. But take it from us; missing out on the distinctive delights and on sleeping amidst the ancient flora of this very special corner of Turkey would be a shame. To go big in Bodrum, it pays to go small.