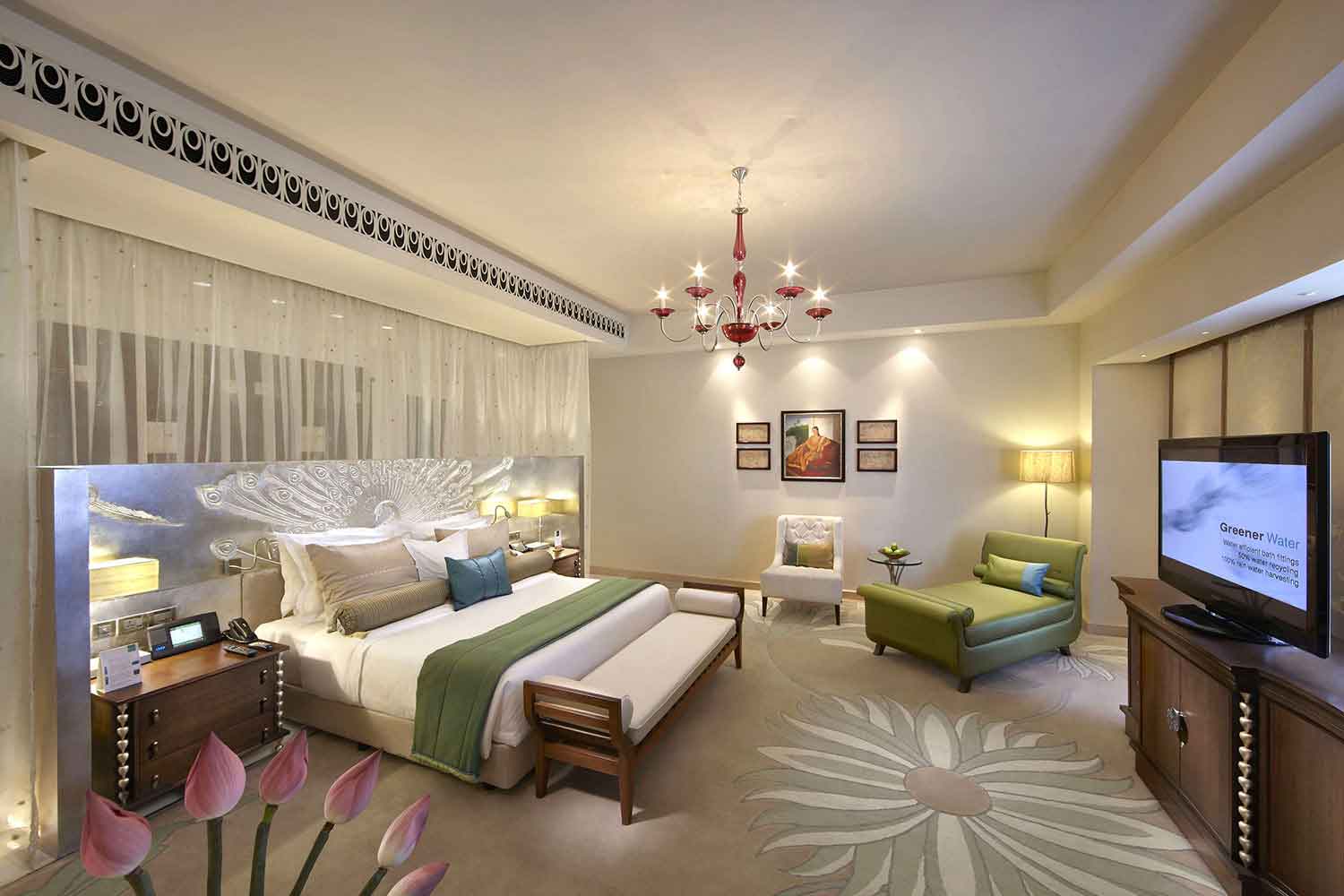 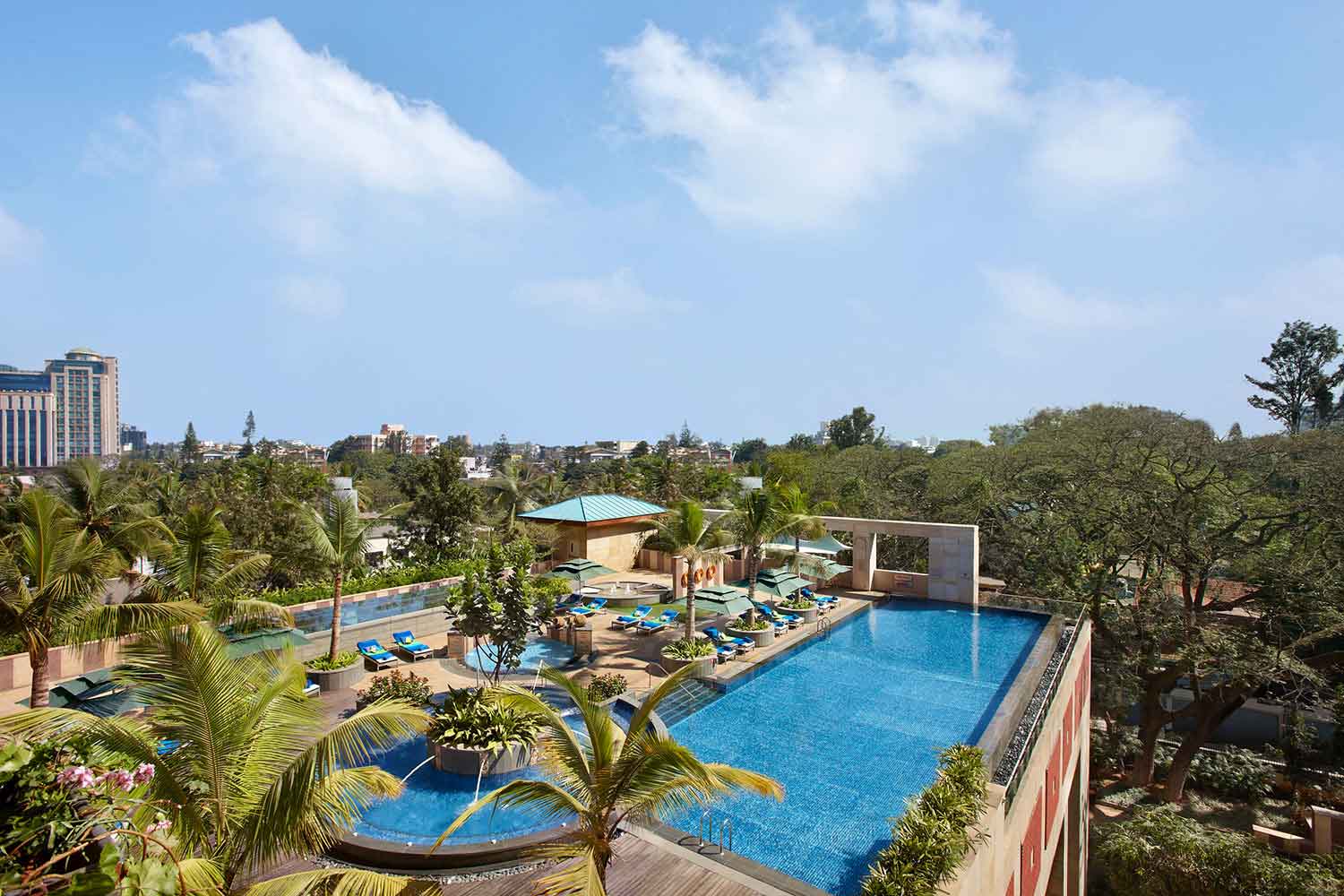 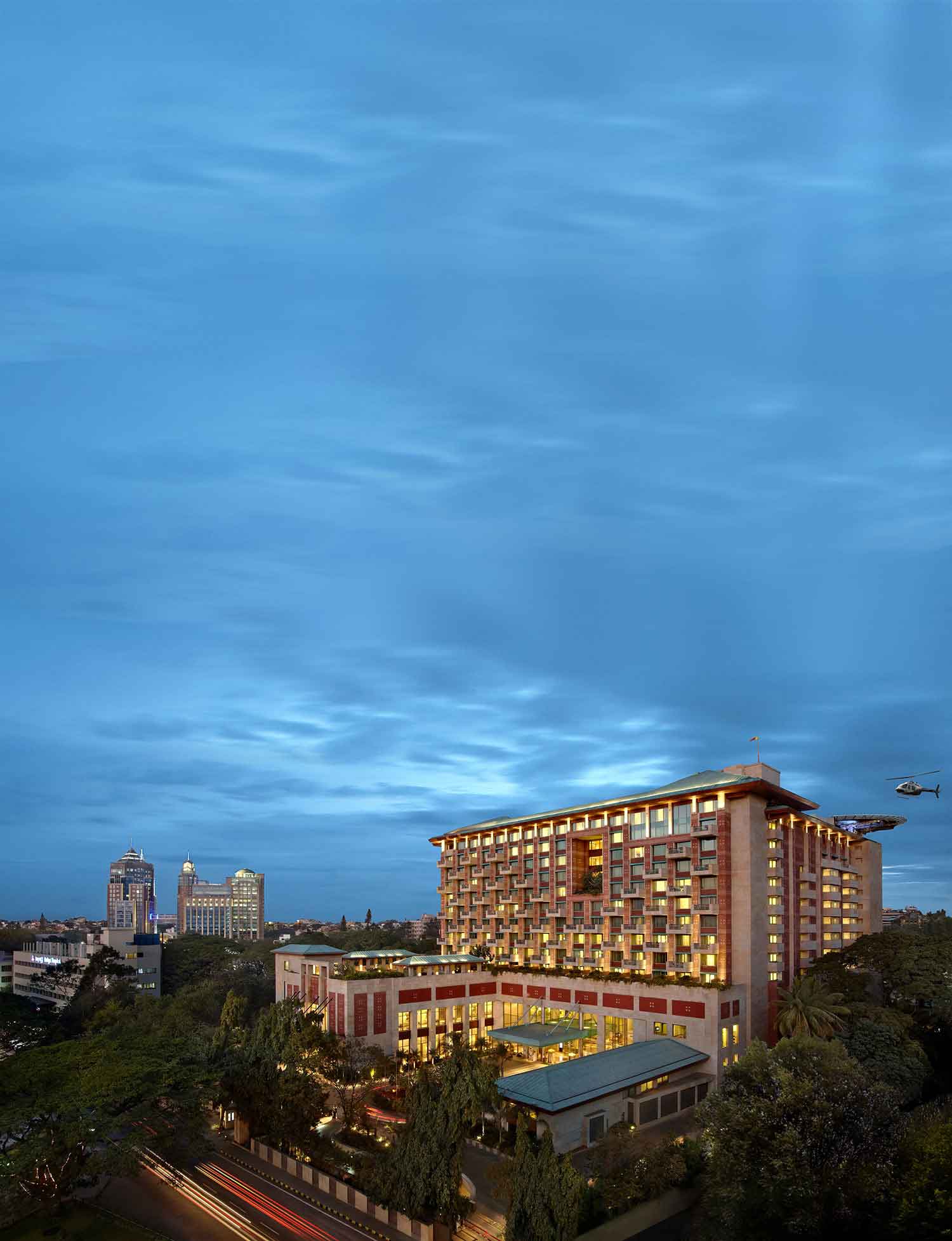 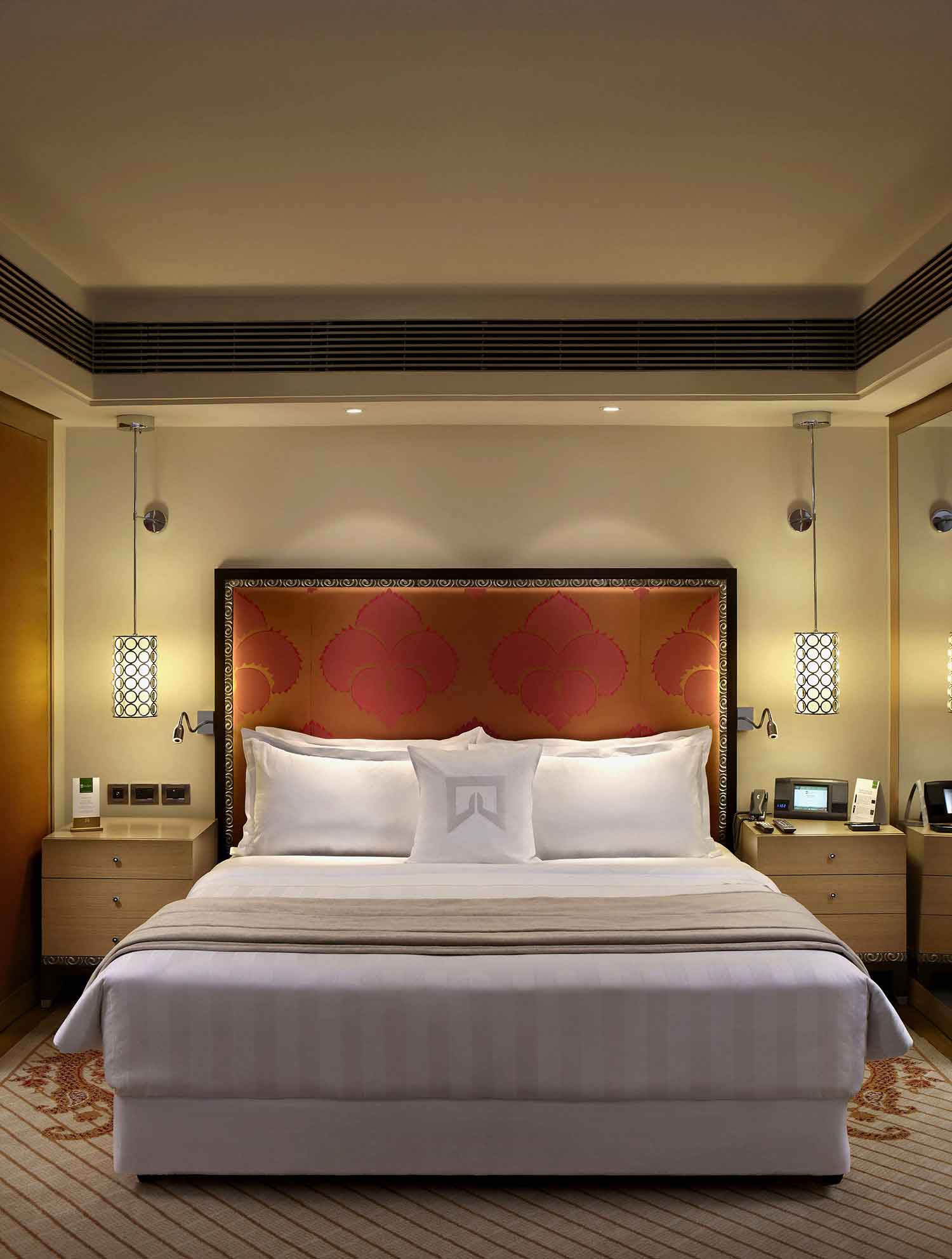 “Everything is so modern in Bengaluru. Even the name is so new that we ourselves haven’t got to grips with calling it that yet,” laughs Ajay Kumar Nayak, Chief Engineer at the ITC Gardenia ‘Bangalore’ – as he proudly walks us round the backstage area of the hotel.

It takes a very confident hotel to show you the behind the scenes of its operation. But we’re paraded through it and shown it all in much detail; from the energy efficient laundry, to the staff canteen. We’re shown employee memos (including a funny note proposing that female employees should wear their hair neat like Margaret Thatcher) and the hospitality targets. Large, colourful posters deck almost every wall, each promoting energy efficiency and green ways of working. Everything is spick and span; and nothing is out of place. If this is the back of house, you can only imagine what awaits out front.

We’re shown the hotel’s beating ‘heart’, the energy control room, literally the ‘engine’ of the property. LEDs flicker, machines beep and giant boilers purr. Ajay rattles off a long soliloquy of technological jargon. He sits us down at a computer screen to show us how every single element of the hotel’s engineering can be monitored, controlled and reported. It’s fascinating stuff, even if it goes over our head a little.

Back out front, he talks us through the hotel’s green spaces and vertical gardens. He tells us how the owner’s wind farms produce a surplus of clean energy for the property and deliver a positive return on investment far beyond their wildest dreams. He goes into geekish detail about how the hotel runs at 40% less energy than any other luxury property its size. He teaches us about water-positivity and the difference between black water and grey. He absolutely beams with pride when he talks about sustainability and profitability going hand in hand – ‘the triple bottom line’ he calls it – not to mention the property’s ‘LEED’ (Leadership in Energy and Environmental Design) Platinum accreditation, the first hotel in the world to receive such an accolade.

All this is just the tip of the iceberg, for want of a better environmental expression. The ITC Gardenia is an unrivalled role model for sustainability in hospitality. The industry is not one known for its care of the environment – travel puts significant pressure on resources as it caters to millions of guests each year. But here at the ITC Gardenia, they bring the science of sustainable tourism up front and centre to hotel guests. It’s part of their brand; the hotel’s marketing tag line is in fact “Responsible Luxury.”

And luxury it is; the Gardenia is easily one of the city’s most contemporary, but opulent hotels. It has a prestigious address, overlooking the Bangalore Club, and is nestled in an elite neighbourhood. It fuses together inspiration from old India with the spirit of what is billed as the country’s silicon valley – lotus pavilions and wind-cooled atriums meet hipster hanging gardens and heat-resisting roofs. Staff in crisp colonial-era uniforms and colourful saris rub shoulders with India’s top influencers and Californian tech moguls in Korean street-fashion.

Aesthetically, the hotel’s interior designer Francesca Basu drew inspiration from nature: stones and fossils, flora and fauna, the sea and sky. Each floor brings something different in colour, texture and creativity; it was a delight to see that despite the property’s focus on environmental technology, they didn’t scrimp on design. Our Flamingo Suite was the proof in the pudding. An enormous, gorgeously appointed, vibrant apartment comprising of close to a thousand square feet of living and dining space, private office, lavish bedroom and luxurious bathroom, with views across the city and all the conveniences fit for us modern Maharajas. For those who may want the ultimate in accommodation, the property’s Peacock Presidential Suite is just the tonic – huge, decadent and opulent all at the same time – it was hard to tear ourselves away from it having been given the opportunity to check it out.

Beyond the physical, the property also prides itself on the experiential; food being a big part of the brand DNA. The hotel has a number of exquisite dining and beverage options, so we never went hungry. K&K was a particular highlight, featuring Mughlai barbecue cuisine of the Indian royal courts. The Japanese restaurant Edo looked equally spectacular, although we forwent the opportunity to try it out on this occasion for room service, just to make use of the dining table for eight that was so beautifully laid out. Breakfast each morning in the hotel’s mammoth Cubbon Pavilion was such a feast, it was hard to know where to start (or in our case, stop).

But there was a further foodie adventure to be had. ITC boasts a brand-wide ‘Food Sherpa’ trail, which takes guests out into destinations to unveil their culinary wonders, accompanied by an in-house ITC Chef. We were lucky to have Yogen Datta, the Gardenia’s Executive Chef, as our escort on our journey of Bengaluru.

As compared to other major Indian cities, Bengaluru is relatively low key. Yet there’s a hustle and bustle and despite it being far less crowded than Mumbai or Delhi, it doesn’t escape the scourge of traffic and Indian drivers’ favourite pastime, the unending use of the car horn. Despite its credentials as a futuristic city, there’s still a vintage feel, especially at our first stop of the tour, lunch at the Bengaluru institution MTR, the Mavalli Tiffin Rooms. It’s Yogen’s favourite place to lunch in the city and he told us that not much has changed since the 1920s when it first opened as the city’s staple of local, Karnataka cuisine. The building itself was stunning – we can only describe it as if Wong Kar Wai did a Bollywood version of ‘In the Mood for Love’. Yogen led us through the packed, old lobby, stopping patiently to watch us take photos of the ambience and architecture. We ascended the stairs past a beautifully etched mirror of a buxom lady waitress, into the large dining room. Metal platters were distributed and the servers came with huge chrome buckets of delights – delicious curries, dhosas, sambars and masala puris – and scooped generous portions onto our plates.

Back in the hotel’s limo, Yogen took us on to Malleswaram, an old part of town. Here we came in contact with ‘old-world Bangalore’ – street vendors and fruit carts, shophouses selling everything from flowers, to second-hand books. There are men unloading trucks full of banana fronds and old women hawking baskets of lotus and jasmine buds. We stopped to take a selfie and a curious, local woman asked us where we’re from, engaging us in a typically Bengaluru conversation about the weather. As we walk by the vegetable vendors, Yogen points out the different ingredients important in Indian cooking. He doesn’t always remember the names of vegetables in English, confused further by the vendor trying to help him out by offering the name in Kannada, the local dialect. An elderly gentleman shopper puts them both out of their miseries, with a short lecture for us all on the English and Latin genus names of everything on sale, in a perfect British brogue.

We walk down the street and head for a local stand-up coffee stall for some infamous chicory-infused black gold. We talk about the local temples and how albeit in an urban setting, some had been standing there since the 17th century. We walk past unending flower stalls, with their brightly coloured offerings for prayer. As the sky opens, we duck into an old snack shop and sample a range of spicy nuts, murukku and sev mamra.

Yogen’s choice to show us the old city does come as a bit of surprise. Any Google search of Bengaluru will throw up a world of contemporary restaurants and bars, craft beer establishments and hipster coffee shops. But while Bengaluru may be a city that is very much in the now, Yogen feels that it is his responsibility to show people where the city came from, so that its heritage is never, ever lost.

It’s great to see that the hotel, despite its forward thinking credentials, still understands its place in the city and provides guests with the opportunity to interact with its past. It’s been a long time since we’ve encountered a hotel with such confidence and a fantastic story to tell across all aspects of what they do; and so while we may understand that Bengaluru may not always appear at the top of an OutThere traveller’s bucket list as a leisure destination, we encourage you to consider it so, as we guarantee that like us, you will be very pleasantly surprised.