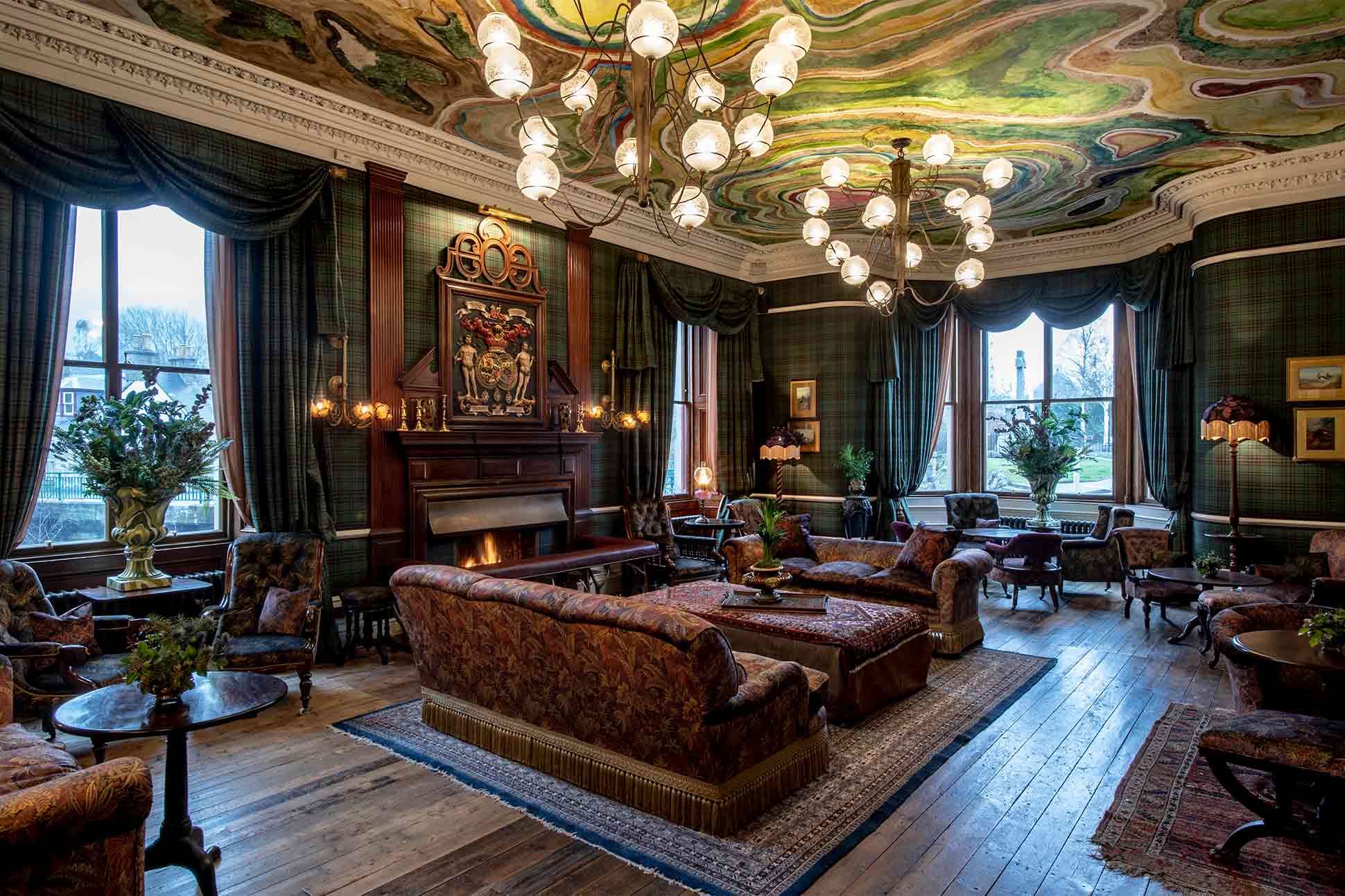 Some 16,000 artworks and antiques adorn what’s been Scotland’s most talked-about hotel since 2018. It’s an astonishing number, but we can think of twice as many reasons to rave about The Fife Arms, a property so full of soul and heritage, to find it in the unassuming Highland village of Braemar feels like flirting with the verge of manic.

The first thing we noticed after our kilted Ghillie Fergus led us into a lavishly decorated Coat of Arms Suite were piping winds giving the bedroom windows a good shake. ‘The building’s listed, so we can’t modernise these. But they add to the hotel’s charm’. As he walked across the room to pour us a glass of welcome whisky, the hardwood floor beneath his feet creaked with history as if to remind us of The Fife Arms’ illustrious former life: built by the Duke of Fife in 1856, the hotel once hosted Britain’s high society who flocked to this part of Scotland after Queen Victoria and Prince Albert bought nearby Balmoral Castle. The Royals are said to have adored the property, and if a watercolour by the former Monarch herself in the hotel’s wood-clad reception area is anything to go by, they sure had an eye for the finer things in life.

You could argue the same holds true for the hotel’s modern-day guests. An appreciation of art, in our opinion, is the ideological lynchpin around which everything revolves here. Owned by influential Hauser & Wirth gallerists and power couple Iwan and Manuela Wirth (the Bennifer of the art world), The Fife Arms houses works by Picasso, Lucian Freud, Man Ray and Cecil Beaton alongside contemporary commissions. Our favourite was the lobby’s bespoke Steinway by Mark Bradford, whose ivories are tickled by an invisible hand playing a Robert Glasper-composed melody exclusive to the hotel (sorry, Spotify).

To find this level of eclecticism, which contrasts 16th-century Flemish painting with Chinese abstract art courtesy of Zhang Enli against a backdrop of Russell Sage-designed interiors and a fair share of Victoriana kitsch, borders on madness all the more because The Fife Arms is at home not in London or Paris, but in a Highland village of 450. At times, when we took a moment to reflect, we felt as though we’d checked into a rural outpost of the V&A that just so happened to have five-star amenities.

Speaking of which, our lush Coat of Arms Suite featured a retractable LCD TV, guides to the surrounding Cairngorms National Park and a wonderfully old-fashioned bathroom stocked with the most sublime Albamhor toiletries which we implore you to stock up on in the hotel’s ground-floor shop. Each of The Fife Arms’ 46 rooms and suites explores a different theme, and our inner animal lover was glad ours didn’t feature any of the taxidermy prominent across the property’s communal areas. We hear only two stuffed animals were ‘commissioned’ for the hotel; the enormous stag greeting guests to The Clunie Dining Room being one of them. As we found his sight rather grim and grotesque, we chose to dine at the more casual, pub-like Flying Stag on our first night, ordering a sumptuous vegan haggis with whisky sauce – both out of protest as well as curiosity (our waiter had admitted it was ‘better than the real thing!’).

When we decided to give The Clunie a try the following day, we were amazed by how well it catered to herbivores: the pea voluté with buckwheat and turnip dumplings was a delight and the wood-fired Hispi cabbage on red peppers and smoked almonds sauce so masterfully prepared, they might as well have framed it and hung next to the Picasso. Another highlight was the mâitre d’, an enthusiastic German named Sarah, who spread positivity as though her last name was Pollock and The Clunie a blank canvas. It was her who convinced us to take a nightcap at the adjacent Elsa’s Bar, named after Elsa Schiaparelli, where devilishly good foam cocktails are prepared using aquafaba rather than egg whites, ‘so everyone can enjoy them’, she said, ‘plus, we think the foam is actually much nicer’.

There’s a lot more we could tell you about The Fife Arms (and, in fact, its recently opened treasure chest of a whisky bar called Bertie’s), but you’ll no doubt want to try and make your own memories when checking in. Not that this will be difficult. The hotel’s grandest feat is perhaps its balancing act between impressing international art glitterati while simultaneously welcoming Braemar’s locals for daily after-work pints. As a matter of fact, some of its finest artworks are the dozens of portraits of local villagers by illustrator Gideon Summerfield, that grace The Flying Stag. They tell a story of local pride and a sense of community that wafts through the streets of Braemar and sits deep within the hotel’s creaking floors. All that’s missing for the ultimate heritage experience, we thought, is for a ghost from the past to float around The Fife Arms’ hallways at night. With a bit of luck, that’ll be us one day.

Photography courtesy of The Fife Arms