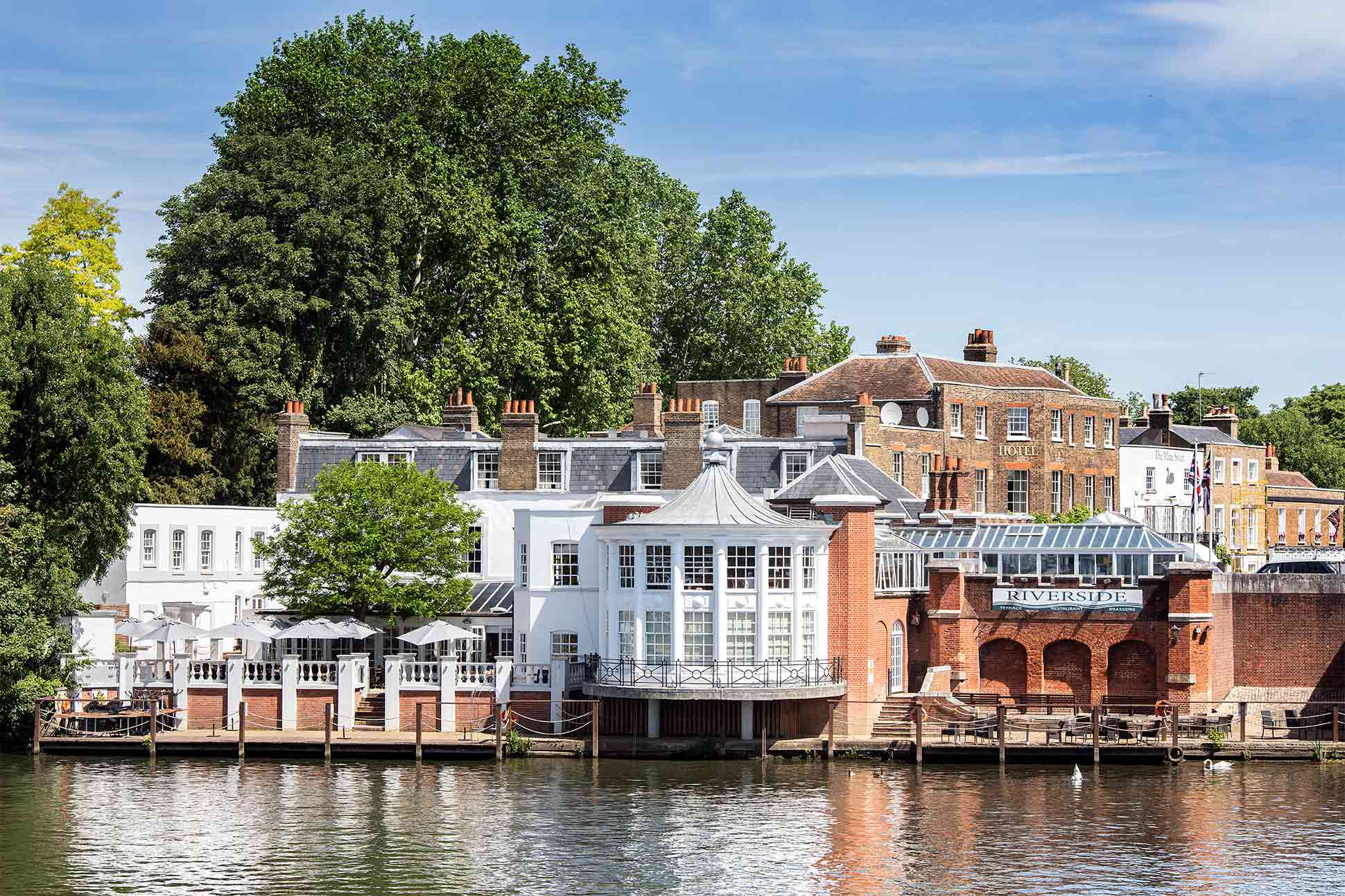 With a privileged position in one of London’s greenest and most historic neighbourhoods, The Mitre Hotel by Hampton Court Palace offers traditional, English flair with a modern twist. Situated directly opposite the gates to the world-famous Hampton Court Palace, The Mitre was originally an overspill for party guests of King Edward II. Although the property has changed considerably since; the relationship between the two has remained. And while it is no longer an official extension of the Palace, the celebratory atmosphere and sense of occasion remain part of the hotel’s DNA. The Mitre gives visitors a good reason to celebrate – and although dog-friendly, we’d recommend leaving your four-legged friend with a puppy-sitter for the very best experience.

We’d originally planned on driving to The Mitre, but after seeing that it was just a three-minute walk across the river Thames from Hampton Court Station – a breezy 30 minutes from London’s Waterloo Station – we decided to be more sustainable and take the train.

On arrival, we were smoothly checked in, a process made all the more pleasurable with a complimentary glass of wine before being shown to our room. As we’re used to having little dog with us 24/7 (and The Mitre is a dog-friendly property) we decided to bring him along too. However, if you do want to bring a four-legged friend, remember that guests with dogs are assigned one of seven lacklustre dog-friendly rooms on the ground floor. Our room, although spacious and recently renovated, lacked many of the design wows in the hotel’s other accommodation. It did access a private courtyard, though (which unfortunately wasn’t quite as quaint as it sounds and unlike the rest of the hotel, suffered from signs of wear). But, what you do get are the same dedicated butler service, personalised turndown experience, VIP car valet service and/or parking space… and the service and efforts to make our pet feel welcome (a dog bed about ten times his size) was commendable.

The Mitre was at almost maximum capacity when we visited so we didn’t get to see any of the more luxurious suites which allegedly shows off the design prowess of Nicola Harding, whose previous projects include Beaverbrook and the Bingham. But judging from photos, the two Signature Suites, the King Henry VIII and Catharine Parr Suites, come equipped with four-poster beds and stand-alone copper baths. Harding’s design influence also stretches across the property. She has given communal areas a homely charm, with nods to the hotel’s Royal history, including hand-painted wallpaper, artworks and photography. This slightly quirky, traditional feel with touches of opulence is – in our opinion – the right design direction, considering the building’s heritage. Anything too edgy could easily have worked against The Mitre’s old English appeal.

The various entertaining spaces are clearly a big draw. With its riverside aspect, the summer months offer up alfresco dining on the water’s edge and with the culinary direction of ‘chef on a mission’ Ronnie Kimbugwe, making the eateries destinations in themselves for hotel guests and the public alike. Kimbugwe cut his teeth with Gordon Ramsay at Claridge’s and then the Bel and Dragon Country Inns, where he created an “extraordinarily successful” group of gastropubs. His menu was wholesome and like the hotel itself, is themed firmly in the realm of traditional, well-made favourites. We enjoyed dinner at the Coppernose – the name incidentally is another little nod to the hotel’s connection to Henry VIII, who gained the moniker after the thin coating on the copper coins he issued towards the end of his rule, rubbed off his nose after time.

We enjoyed our table with river views and were treated to three courses of delicious food. As seafood lovers, we relished the dozen rock oysters and a whole lobster. The meal was topped off with a flaming baked Alaska pudding. We did say it was traditional!

Photography courtesy of The Mitre Hotel