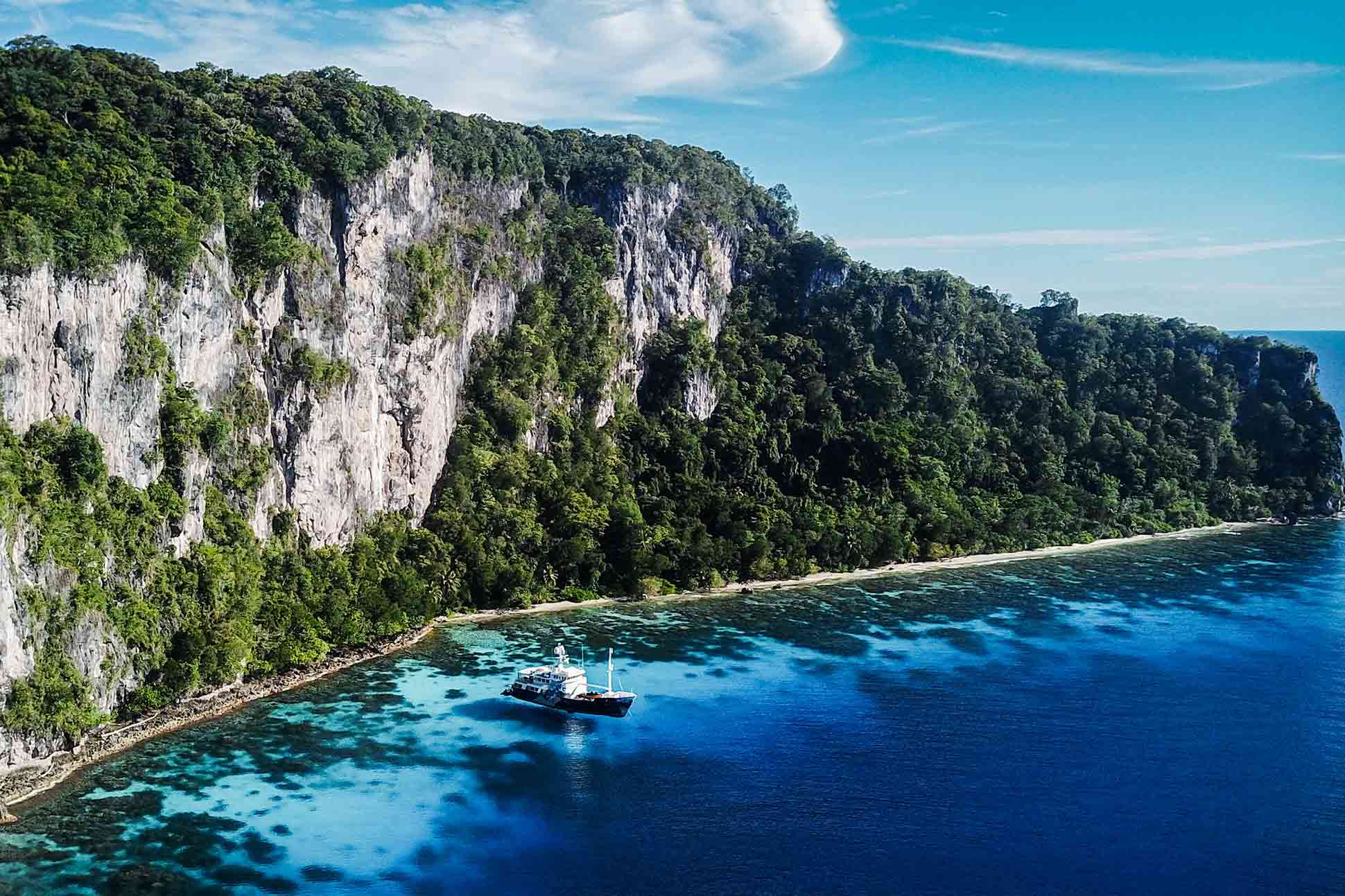 When people think about escapism, many picture themselves barefoot on a beach, or at a spa, doing not very much at all. But for others like us, taking on an Experientialist-class adventure on the high-seas, diving into mostly untouched spots in truly secluded anchorages teeming with rare marine life – matched with five-star liveaboard luxury – transcends the cliche of ‘getting away from it all.’ But there’s a new kind of sea-bourne escape that affords the opportunity for both. This is Dardanella, an expedition/explorer yacht that has been made available for charter for the first time.

There are getaways, and then there’s getting away. The luxurious boutique explorer yacht Dardanella, elevates both concepts. First, there’s its focus on wellness, unique for what is ‘just’ a 37-metre craft for twelve seafaring experientialists, with a permanent crewmember dedicated to holistic wellbeing on the high-seas. Call her a yacht-yogi, but Ayumi Gallagher is inspired by the healing power of nature and water; and embodies it in her ethos, fusing the anatomical foundations of Pilates, massage therapy, yoga and spirituality to create bespoke wellness journeys onboard. The treatments are linked to adventure too: breathing and muscle-work to complement diving, as well as yoga and balance before surfing or paddleboarding.

Then there’s the yacht itself, originally designed and built for adventure and has banked an impressive list of conservation explorations across the world’s oceans over the decades. Dardanella was constructed for long-range capabilities and has a shallow draft that lets its crew access places other yachts cannot. Her heritage as an explorer vessel is an illustrious one, she has been part of some significant findings, including the bio-fluorescent hawksbill turtle, near the Solomon Islands, voted as one of the top 20 most important discoveries by marine biologists of the past decade. Dardanella’s other expeditions have also supported or led to the establishment of marine-protected areas, for example research and conservation programme for the pelagic species around Cocos Island, Costa Rica. The East Portland Fish Sanctuary, was also established as a result of its work. Dardanella was also part of a team that declared the first offshore protected area of the Navatu reef, in Fiji.

That pedigree, inherent spirit of exploration and quest for conservation continues on the Dardanella as it readies itself to take on luxury guests. Having long cruised the Pacific regions and within that, the remote Western Pacific region of Papua New Guinea, the Solomon Islands and Marshall Islands, she also spent a full year navigating the beautiful islands of French Polynesia, all the way down to the Gambier, Marquesas and Tuamotu Islands. While this may be a famous sailing route, what makes Dardanella special is her in-depth knowledge of the marine topography, sliding into usually inaccessible locations and navigating areas that other yachts won’t approach. And of course, there are the people she has encountered in her traversing the region, which provides local (and sustainable) access to the best and most experienced guides, storytellers and dive instructors. This is in addition to the yacht’s First Mate, your own, personal PADI dive-master for the duration of the expedition. While we’re talking crew, Dardanella’s current captain is a world-class competitive sailor turned professional yachtsperson, as well as a graduate of Marine Zoology and Ecology, with specific expertise in the aquatic ecosystems of the vast Pacific Ocean. So it’s needless to say, you’re in good hands.

Dardanella will continue its Western Pacific endeavours for the rest of 2021 before heading to Central and South America in 2022, en route to Antarctica.