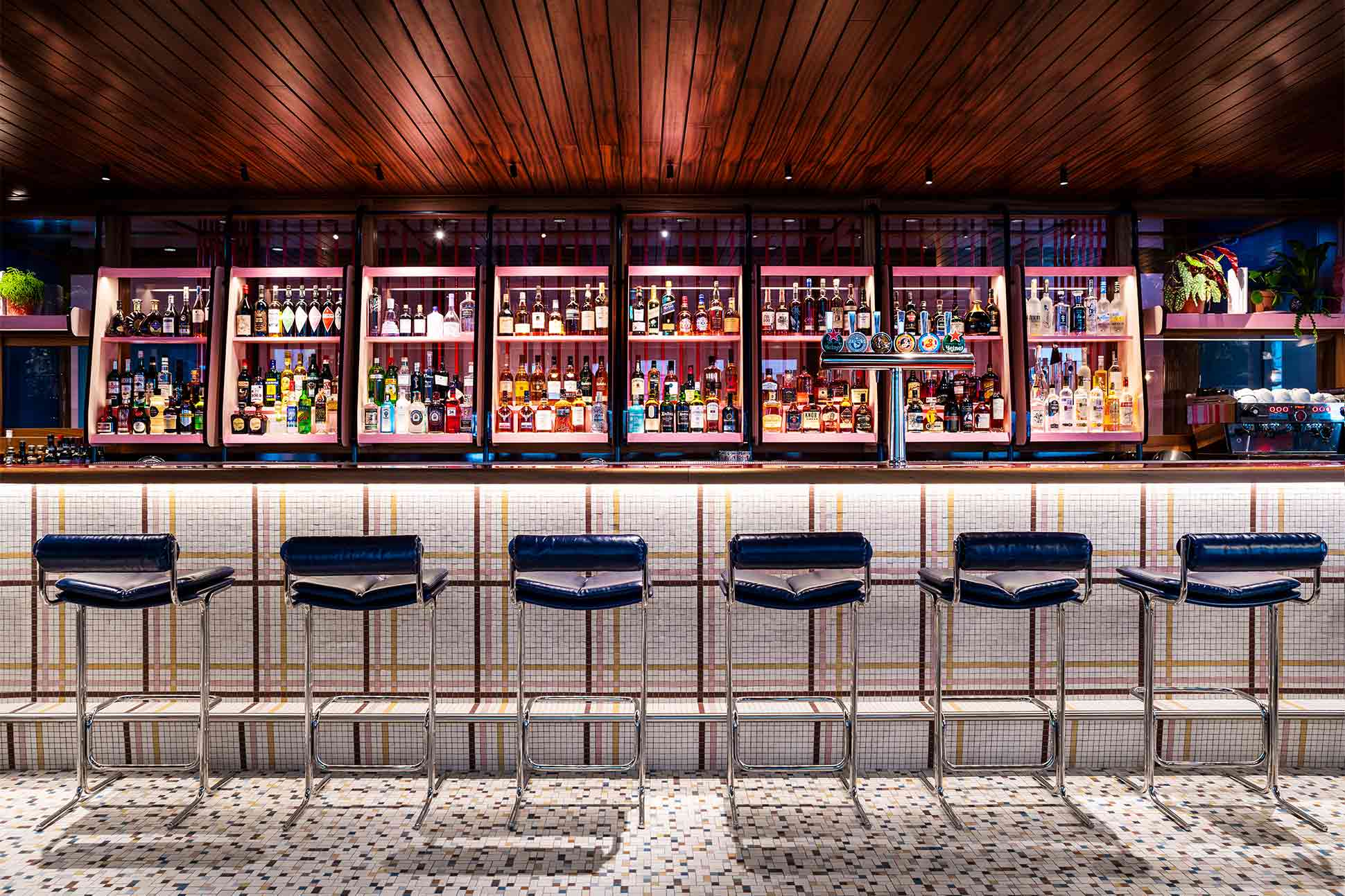 Within moments of checking into The Standard, London, we were in the open-air bathroom of our ‘King’s Terrace’ in our Craig Green designed bathrobes, sipping champagne and waiting for our open-air bathtub to fill with water. Not at all a bad start to our stay at this much-talked-about hotel.

Eight floors below us, London life passed by along the Pentonville Road. Across the street sits the resplendent Victorian St. Pancras Renaissance Hotel. Both hotels represent different eras in the area’s history and its current rebirth as one of the most vibrant districts of ‘2020s London’. The Victorian Grande Dame, The St. Pancras Renaissance Hotel, was woken from her 76-year slumber a decade ago in response to the area’s hastening rejuvenation due in most part by the Eurostar’s terminal being relocated from Waterloo to Kings Cross. The transformation of the 1970s Brutalist Standard, once the offices of Camden Council, was only completed in 2019, sealing the area’s return to form as a hip destination (and a stylish one, if you ask us).

As fans of this much-maligned school of architecture, we have witnessed the sad obliteration of so much of London’s Brutalist heritage which defined the London which we grew up in. So we were delighted to hear a few years ago that ‘The Egg box’, as it was known locally, was to be spared the wrecking ball. But we had no idea just how well the building would be not only restored but given a whole new lease of life by The Standard’s long-term designer Shawn Hausman. Elevating the hotel into a stylish destination all of its own, with more than a few loving nods to its past.

For those of us old enough to remember, the ‘70s have a love for all things curvy, colourful and comfortable. And it’s these three design elements that Hausman has run with to achieve The Standard’s striking look. The lobby and bar are a joy to behold, welcoming and arresting at the same time. Small touches, like the use of recycled chunky plywood freestanding bookshelves which housed the books that we first developed our love of reading from, and gorgeous fluffy ‘shagpile’ wall hangings made us smile with nostalgia. Everywhere you look is yet another homage to this golden era of interior design from the bar to the in-house radio studio. If Pedro Almodovar ever made a film based in London, The Standard would be high on his location scout’s list, and if Stanley Kubrick were still alive, we’re sure he’d approve of the decor in the ‘2001: A Space Odyssey’-like rooms with their rounded cornered windows and ‘egg box’ ceiling.

Unfortunately, on the day we stayed the hotel’s signature restaurant Decimo was fully booked, but we enjoyed a celebratory drink on the rooftop as the sun set over the West End skyline, before riding the hotel’s distinct phone box red exterior elevator down for a bite at Double Standard, which specialises in tasty but simple American diner fare.

A week later we were back in the Standard’s library for a talk by OutThere contributor and London clubland legend Jeffrey Hinton as part of their on-going ‘Double Standard’ intergenerational in-conversation programme, which aims to cement the hotel’s connection to the capital’s cultural landscape by sharing engaging stories from some of London’s most interesting residents from the creative industries.

Photography by Charlie McKay and courtesy of The Standard London