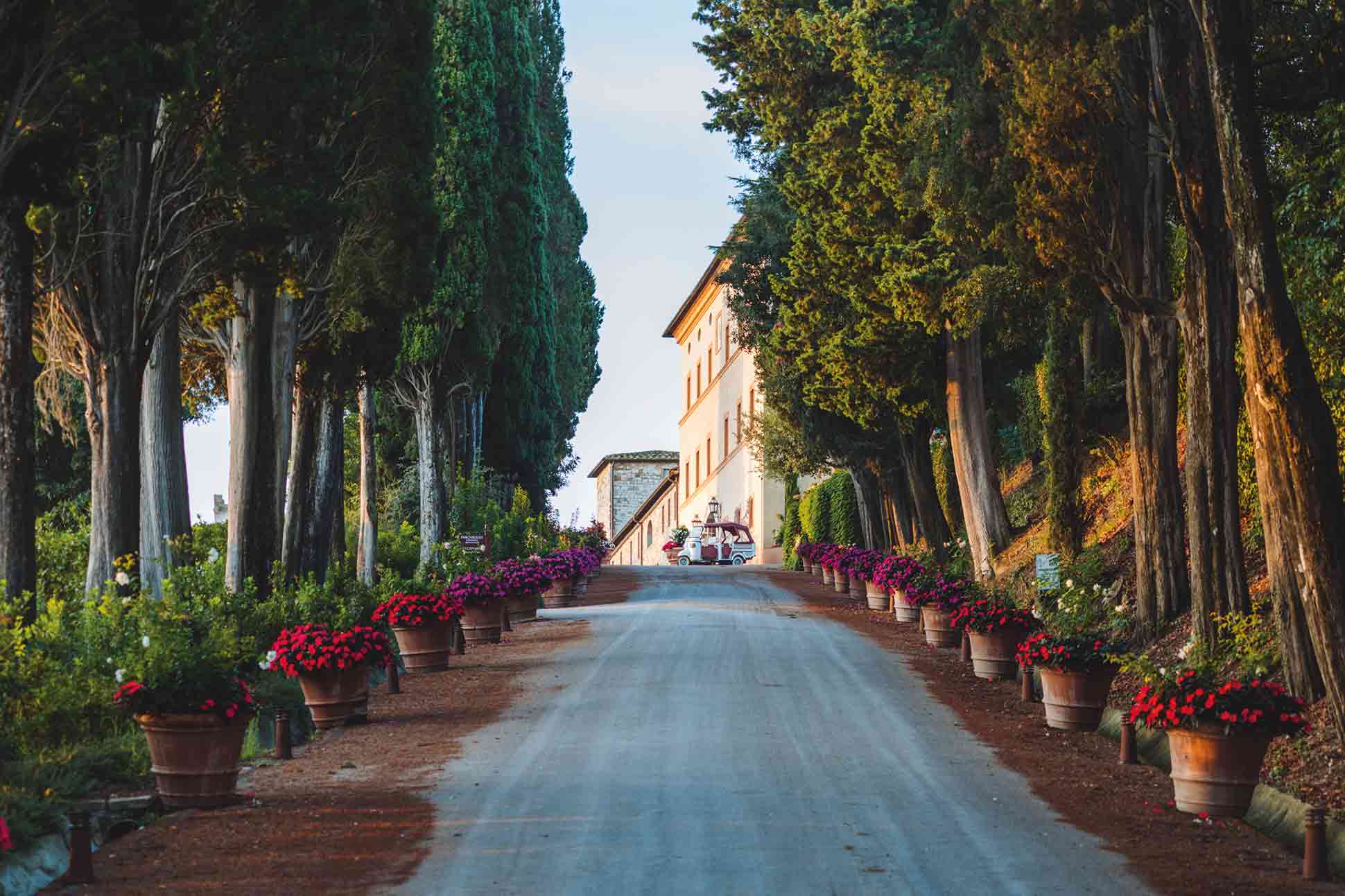 Like the rest of the jet-set, we have a real love affair with Tuscany. One of its jewels is the Castello di Casole, the once-playground of Italian film director Luchino Visconti, his ideal slice of the cinematic Tuscan countryside, complete with a welcoming, hug-like brand of hospitality that can only come from experiential travel experts, Belmond.

At the heart of some astounding 4,200 acres of land, we found a tenth-century castle complex that gives the Castello di Casole, a Belmond hotel its name. The first refurbishment of this historical site into a hotel allegedly went into nine figures and took over six years, with every aesthetic detail scrutinised by the Italian ‘heritage police,’ the Belle Arti. Not only does the site date back to the Bronze age (the property’s story goes back even further than its buildings, some five thousand years in fact, to the days of the Etruscans) but its archaeological value is also medieval and has 19th and 20th century architectural and cultural significance. Rumour has it that the property was painted an excruciating three times over because they couldn’t get the right shade of Tuscan yellow to appease the powers that be – something our Creative Director will appreciate.

Grandiose in its history, physicality and views both inside and out, the Castello di Casole has played host and home to luminaries for centuries. First, it was the local aristocracy, the Bargagli family, who built the Tuscan villa and farm that sits on the site today. Then, in the late 20th century, Luchino Visconti made it his holiday home, where he entertained the big-wigs and stars of Hollywood with his own brand of Tuscan decadence.

The Castello di Casole’s history as a hotel began when it was renovated and reopened in 2012, by Colorado-based Timbers Resorts. Then in 2018, Belmond acquired it and began its journey to bring it into the Belmond family, an evolution that is evidently still happening at the time of our visit, some years later.

Our Limonaia duplex suite (set in an ancient farm building that once protected lemon trees in the winter) was a remarkable, cavernous space that came with its own charming terrace and garden (and a resident hedgehog – we called him Luchino), but it lacked that quintessential Tuscan view.

While effortlessly comfortable, it presented a somewhat muted, earthy, American-standard or chain-hotel colour pallet. A large, colourful piece of art attempts to punctuate the room, a montage of Tuscan doors, printed on canvas. Sadly, it was like something straight off the shelves of the Ikea near Peretola Airport. Some (better) choice embellishments that we’d have liked to have seen more of, considering the very large space, are the artisan alabaster bathroom-ware from nearby Volterra and antique wooden headboard. Each brought some local flavour and Tuscan storytelling to the suite, which we felt had huge potential to exude greater character.

Much more magical, however, are the Exclusive Suites in the main house, with its exposed stonework, archways and original floor tiles – not to mention views of the rolling hills. We’d recommend that OutThere travellers upgrade to these ‘suite spots’ for a true sense of place.

Swinging completely in the other direction, located down the hill from the main house are the Oliveto Suites, chalets in modernist Italian style, complete with design-magazine-worthy furniture. Choice abounds at the Castello di Casole.

But outside the suites is where the real magic happens… cinematic magic in fact. Perfectly framed sunsets over the Tuscan countryside, driveways lined with cypress trees, rose gardens, truffle-filled forests to roam in and buildings laid out like a Tuscan hamlet, all set around a church (now meeting space) and various piazze or cortili (squares and courtyards). Walk through the main house and a treasure-trove of Tuscan elegance reveals itself. Pop into a little door and you’ll find a space with a large old wood-fired oven, where the village’s original residents would have baked their bread. Today, it’s also pizza that’s fired up in here, (drizzled with the property’s own olive oil) and it’s where the Castello di Casole teaches guests how to make Mamma Margherita’s tortelli with wild boar, a Tuscan pasta dish topped with shaved truffle and Stracchino cheese. Another door leads to Tosca restaurant, where breakfast, plus all-day Italian and international dining is on offer.

Beyond making and stuffing our faces with delicious food and wine; and lounging out by the property’s contemporary infinity pool, the Castello di Casole offers up some Belmond-inspired experiences too. From its sublime spa (and impromptu archaeological museum) to brand-famous first-light walks, to truffle hunting with dogs, to e-biking through the spellbinding countryside, to a new one by us… foliage printing (yes, it’s a thing), we were never short of something to do here.

Belmond’s Italian hotels are world-famous, many are icons and are as renowned as the destinations they are in themselves. So, to die-hard Belmond fans, the Castello di Casole may sometimes appear like the quiet, less confident sibling, but that doesn’t make them any less charming. But where perhaps there is some room for development, is in bringing out the storytelling more; and distancing themselves from the influence of the previous owners, which sometimes still lingers.

There are odd moments where the Castello di Casole feels like a Napa Valley country club, rather than a Tuscan haven. We felt that the property still has a little bit of maturing to do, to connect to Belmond’s signature, characterful, experiential glamour. But this said, it is already a great hotel now, so we can’t wait to see it fully come of age, because if and when it does… it will be mindblowing.