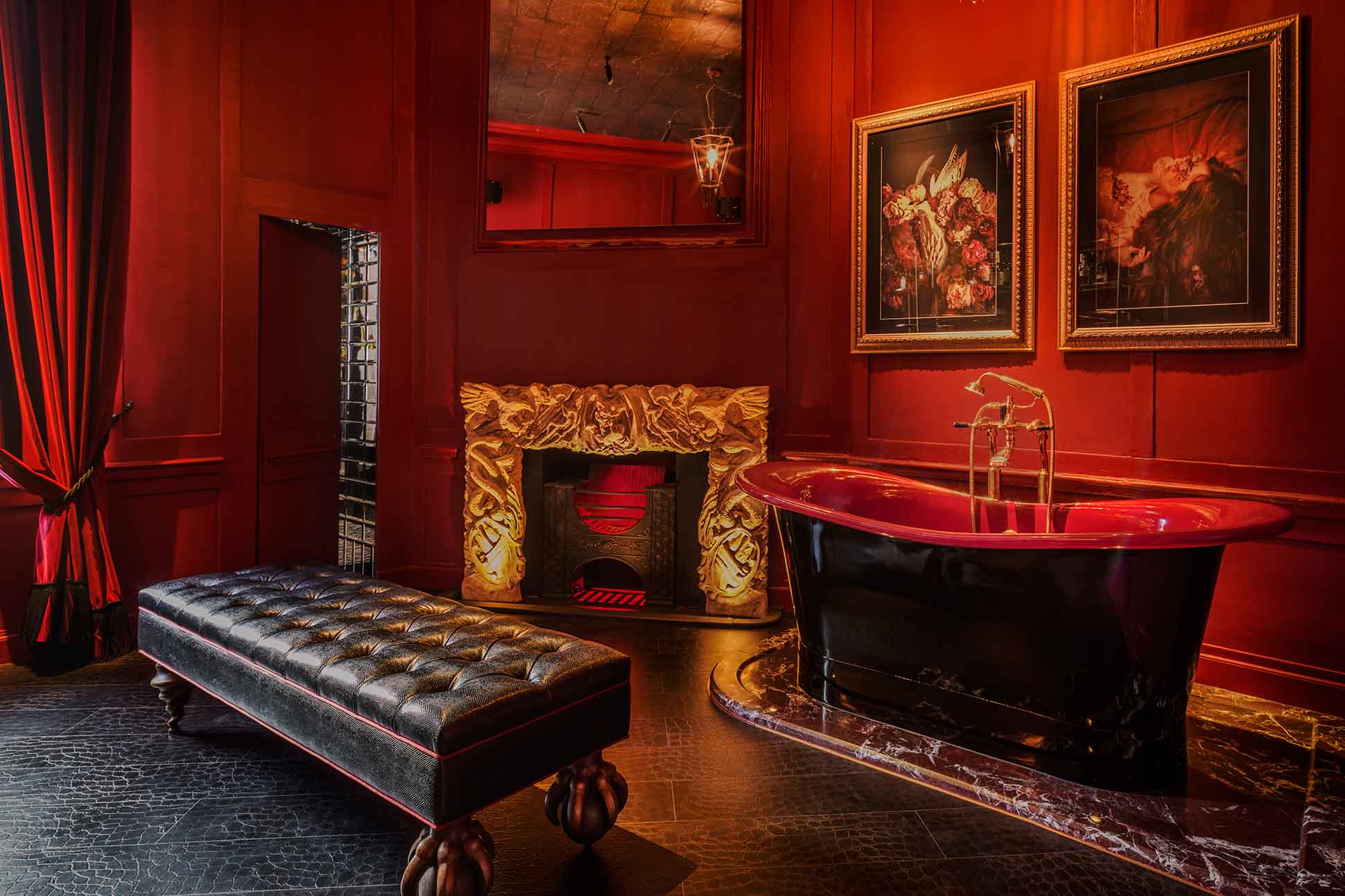 There’s a luxury London hotel, hell-bent on hedonism… tucked away and almost hidden in plain sight in Soho, on the storied, once tin-pan alley and spiritual home to the London music scene, Denmark Street. Intrigued? Well, we certainly were. And Chateau Denmark didn’t disappoint.

London’s Denmark street and the area that surrounds it capture the spirit of the British capital for many OutThere travellers. Us Experientialists of a certain age, remember the LGBTQ+ dens of drinking, dancing and depravity (well at least for some of us) like the London Astoria, LA2 and Tube (Ghetto for younger ones) just across the way. It’s where many of us found ourselves (and countless others) back in the nineties and early noughties. Those venues may have now gone with the recent and rapid gentrification of Soho. However, today’s nostalgia-inducing equivalent, G-A-Y late still exists if you peek out of the window of Chateau Denmark.

For the music lovers among us, Denmark Street is a hall of fame for the great and the greatest of Brit-sound who lived, worked, mused and recorded there. That’s everyone from the Rolling Stones, to the Sex Pistols, to David Bowie. You’ve heard of the rise and fall of Ziggy Stardust, but have you heard of their birth? Well, it allegedly happened here on Demark Street!

As mentioned, Soho has inevitably seen some gentrification. And whatever you think of it, it’s undeniable that to some extent Soho’s original soul, like Ziggy, has risen and fallen. So, it is absolutely refreshing, that amid a flurry of template luxury hotel openings in the area, a conceptual property – Chateau Denmark – is doing all it can to stand out and reinvigorate the area with that old spirit.

Sixteen individual buildings (some Grade II listed), along Denmark Street have been reclaimed to make up what is Chateau Denmark. The brainchild of Carrie Wicks (formerly of Firmdale), she broke the mould and reimagined what a London stay is – everything from the way the hotel (and some long-stay apartments) are laid out over a number of different properties, to the unique storytelling and narrative that time travels to when punk rock and psychedelia was all the rage.

It’s a powerful statement and frankly, a risk… but it paid off. The urban, vintage gothic interiors by Taylor Howes are edgy, sultry and playful, channelling Westwood and the Rocky Horror Picture Show simultaneously. Our suite featured wipe-clean black rubber floors, bedside ‘toy drawers’ and chastity padlocks that secured intriguing sex toys to the wall (unlockable on request).

Thought-provoking rock art line the walls, curated by Artiq. We loved the portrait of Mick Jagger in our session room. It set the tone for our stay, considering Jagger once said that “anything worth doing is worth overdoing!”

But the pièce de résistance to drum in the ‘back to mine’ party vibe was a ‘maxi-bar’ for the perfect Soho night out (and in), or perhaps even a night-caps or afterparty. Changing the way amenities are delivered, Chateau Denmark has decided to supersize the traditional in-room bar, featuring a generous selection of full-sized, premium spirits and mixers, wines and champagnes, not to mention a full bar set-up complete with ice-maker, premium glassware and a cocktail set. And if we can’t be bothered to make it ourselves (we couldn’t) our “BTLR” –  our go-to-guy for the stay: a flamboyant, larger-than-life character in a gender-fluid kilt (part of the uniform) who was ever-ready at our beck and call, just a WhatsApp message away – would come up and shake up drinks for us, or recommend where else in the neighbourhood is best to get one.

Chateau Denmark is ultimately an experiential, fun and rock and roll place to stay in the British capital. Moreover, it is a gamechanger for London right now and a destination in its own right. Is it faddish, and will it stand the test of time? Well, we will have to wait and see, but for now, we feel that this is just what London-philes the world over have been waiting for.