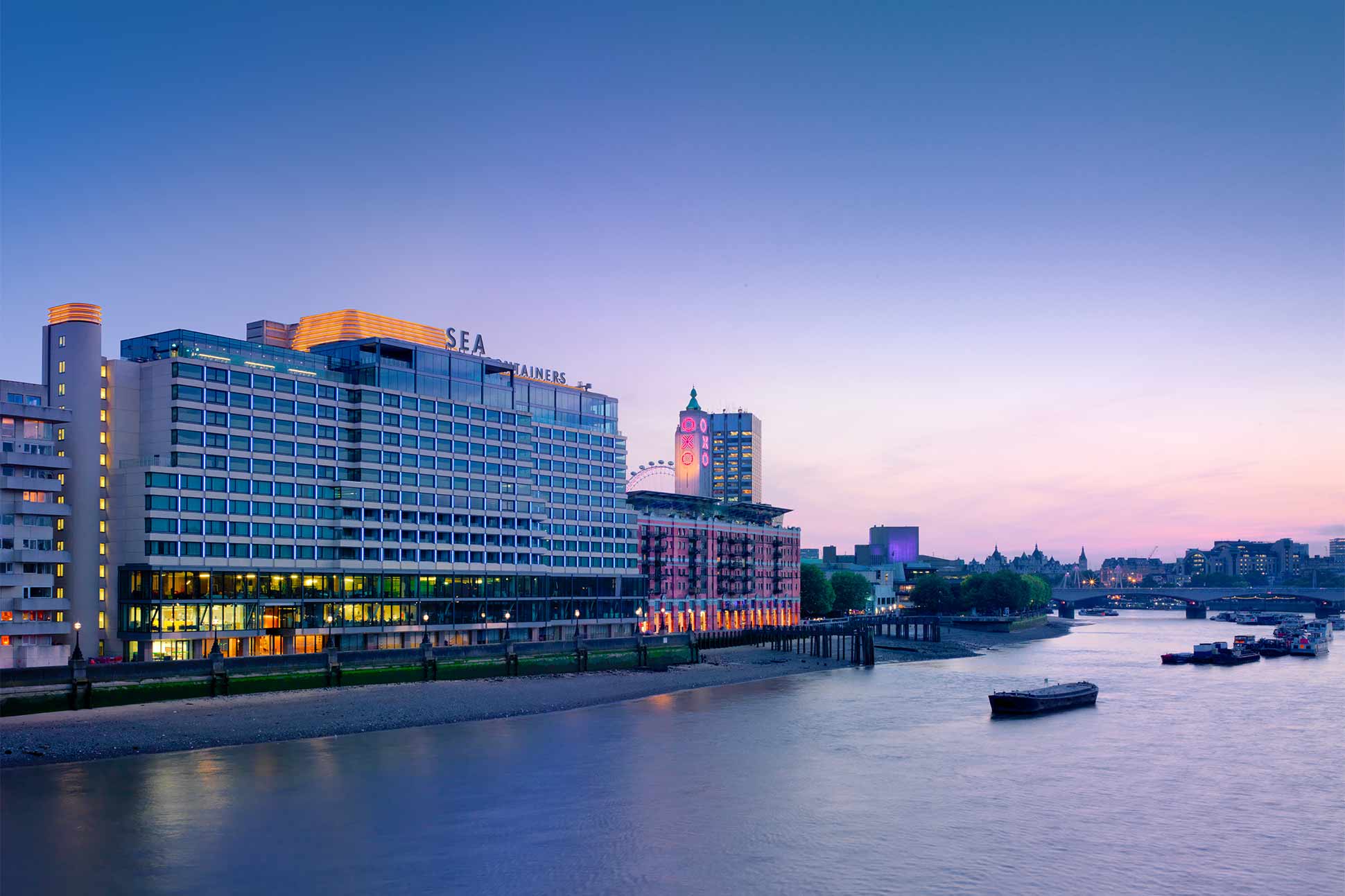 Walking into the hull-inspired lobby at London’s Sea Containers, we couldn’t quite believe it’s been some seven years since we last visited this ocean liner of a hotel nestled along the River Thames. A lot has changed across the property, but one thing hasn’t: Sea Containers still supports The Felix Project, a charity working on providing food for the capital’s most vulnerable. Appropriately enough, a portion of the proceeds from each three-course Thanksgiving dinner on 25 November will go straight to them – reason enough for us to book ourselves in for a London staycation.

When Sea Containers initially opened as the first-ever Mondrian outside the States in 2014, it was the talk of the town. A certain, not-to-be-named US rapper had thrown a mega bash at the hotel’s top-floor bar on opening night, and having heard the news, we made our way there the following evening. Though too late for hip hop royalty, we were right on time for excellent cocktails and electrifying views of the City as the sun went down and a million little lights come on. The vistas haven’t changed much, but ever since Lore Group (who’s also behind Amsterdam’s Pulitzer) has taken over the hotel, renaming it simply Sea Containers London, it’s safely dropped anchor in the elite harbour of famous London addresses. And that’s not least thanks to its prime location.

There’s the charm of the Southbank, including it all has to offer – Tate Modern, the Royal Festival Hall, the National and Globe theatres – as well as some major London sights like Somerset House and St. Paul’s Cathedral just across the Thames. And then, there’s the river itself: muddy but mighty, the Thames is so close to the property, it’s impossible to see the walkway below as you lean over your balcony and look down. What makes this particularly ingenious is that it creates an illusion of being on an actual cruise ship, floating down the current… perhaps that’s why placed an illuminated, funnel-shaped structure as well as a chimney on the rooftop.

But this isn’t the Queen Mary 2, and things are a lot more casual around here. This particularly goes for the hotel’s 359 rooms and suites, which feature a contemporary, white and grey colour scheme interspersed with metallic touches, geometric-design throws and wardrobes and cabinets revealing hot pink interiors upon being opened. Like all suites, our Signature Balcony Suite on one of the upper floors boasted the hotel’s famous views of the Thames, Blackfriars Bridge and the City, and it goes without saying that when booking, OutThere travellers should always opt for riverside accommodation (only the best will do, right?). With regards to amenities, our suite featured everything you’d expect in a place like this: two LCD screens, a ‘hotel office’ working area and a separate WC across the hall from our master bathroom. Speaking of which, we rather enjoyed the Malin+Goetz amenities and thick bathrobes that kept us warm as we stepped out onto our balcony to soak up London at night one last time before it was off to bed.

The rest of Sea Containers is just as well-equipped, with a weekends-only Curzon cinema in the basement, the stylish 12th Knot glass box of a bar (look out for the stand-up comedy nights here!) and the Lyaness bar on the ground floor – named the world’s best bar in its previous life, Lyaness was completely revamped after receiving the honour, and it continues to innovate: ‘Some ingredients we use in our artisanal cocktails have been cooking in the kitchen for 24 hours before making it into a drink’, an enthusiastic waitress explains to us as we enquire about just what made our Carrot Michelada so aromatically sweet (sure, it’s the vegan honey they use, but also the carrot cordial!). Throughout Sea Containers, you’ll also come across no small amount of eye candy in the form of furniture courtesy of famed British industrial designer Tom Dixon, who – we kid you not – we used to live just across the road from and once shared a plate of gnocchi with… but that’s another story.

Almost all of the property’s design accents highlight the building’s previous use as the home of a now-defunct shipping company working the transatlantic route. Wherever you look, you’re frequently reminded of the golden age of waterway trade between the United States and the UK, and the huge, blue anchors just outside the hotel, as well as at the centre of its lobby, add no small amount of pizzazz to a theme some might not otherwise take an interest in. We wished we’d seen more panache on our suite as well, especially seeing all room categories appear to simply be differently-sized versions of one another, which left us longing for a sense of soul and individuality we think the top end of any accommodation spectrum deserves, if not needs.

There are a lot of ways Sea Containers sets itself apart from other five-stars in the capital: sneaker-wearing staff addressing guests by their first name, no signage or name tags anywhere in sight, so as to encourage interaction and exchange, and perhaps the most out there playlist we’ve heard in any one London hotel restaurant – take it from us, it’ll be a while until you hear Sampha at The Ritz’ afternoon tea. With so much to speak for this large and luxurious Southbank hotel, it won’t be another seven years before we board the ship again.