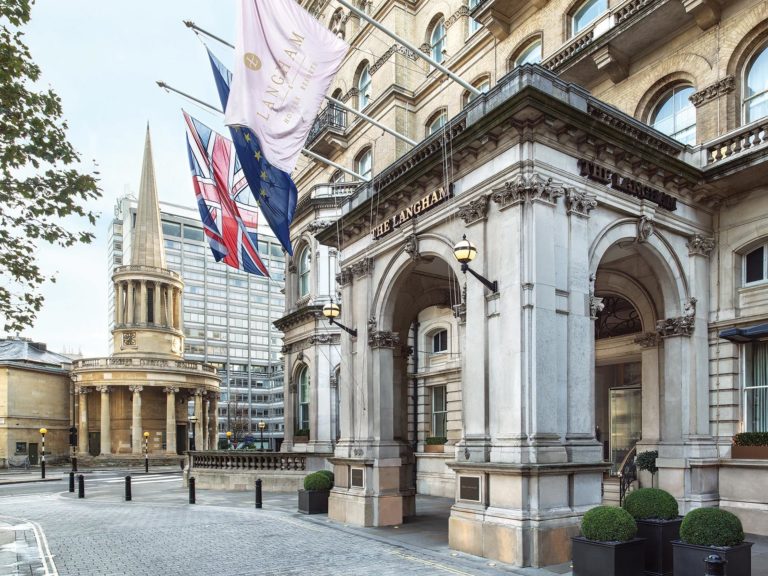 The Langham London is a landmark of Central London sophistication, set in a resplendent, old heritage building just off the northern extremes of the grandiose parade that is Regent Street.

Its location is enviable, bang-smack at the heart of London’s ‘West End’ – with the sprawling Regents Park; the iconic Palladium Theatre; dazzling Carnaby Street; the OutThere drinking dens of Soho; and for those in the know… the nip and tuck clinics of Harley Street, all within a short walk of the hotel.

The nearby icons we cite sum up the Langham London rather well, as there’s something for all vibes here. For lovers of history and architecture, there are a hundred stories waiting to be told, it’s no wonder that the property’s Gothic-esque influences inspired Arthur Conan Doyle to write it into three of his Sherlock Holmes novels.

For those into a little more razzle-dazzle, it’s a hub for London’s ‘luvvies’ – from theatreland to TV (the old BBC studios are literally just across the street). You’ll spot many stars of screen and stage supping the hotel’s infamous afternoon tea in its historic Palm Court.

For those with a penchant for fashionable drinking dens, the Artesian, the hotel’s cocktail and champagne bar will delight with its selection of creative and theatrical mixology. It’s one of our favourite OutThere places to while a London night away – intimate, chic and hedonistic all at the same time. For those more into the London gastro-pub scene, you’ll feel right at home at the Wigmore, part of the same building, but with its own separate entrance.

And those into cosmetic augmentation … well, you’re going to love the rooms. Our One-Bedroom Residence continued the theme of sophisticated decadence, albeit with a subtle and neutral facelift for today’s travellers.

Greys and creams, accented by floral motif carpets and striped cushions are draped in cashmere and cotton, watched silently by understated but fascinating pieces of art and mid-century modern-inspired lighting. We liked how this particular suite (541, if you’re interested) wrapped around the corner of the building, bathing it in sunshine throughout the day. It’s everything you’ll expect of a Langham and much more. We will say, however, that there is a rather old-world vibe to the accommodation – we’d term it classic, European elegance – so if you’re after clean lines, or colourful, zany modern quarters (that seems to be all the rage in contemporary London hotels openings these days), you won’t necessarily find that here – although there’s a fine chance that the hotel’s Sterling Suite may win you over.

Our stay came with access to the best-kept secret in town – the Langham Club, they got us at complimentary Perrier-Joët on tap, and snacks from the hotel’s fine dining option, Roux at the Landau. We know of folk that wouldn’t ever leave this little hideaway, but frankly, we personally loved the conviviality and sociality of the rest of the hotel. So, while the Club was very much us, you’ll be more likely to find us holding court at midnight back down at Artesian.