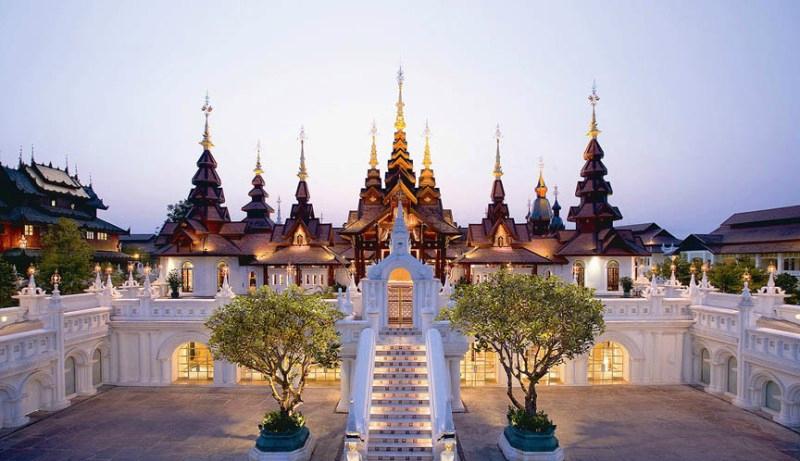 The quintessential vision of Thailand – stepped towers, intricately crafted stupas, reclining buddhas and a skyline of chedi towers exists in parts, but today’s Thailand is more about sky-scrapers, high-tech mass transit and iPhones. And this philosophy of embracing the future is often reflected in the country’s numerous luxury hotels – where you’ll find Lacroix and Starck, plus the work of a new crop of talented, contemporary Thai designers. With so many Thai hotels now going for ‘designer chic’, it’s great to find one that offers contemporary luxury in a uniquely Siamese, setting.

But in Chiang Mai, there’s a true gem. The Dhara Dhevi. To say it is a five star resort would be underselling. It’s much more of a luxurious lost city within a city, with its own little ‘villages’ – an awesome spa, restaurants, a cooking school, a library, a concert space – sprawling over 52 acres of rural landscapes. Its architecture is magical, part Buddhist, part Thai – with some Burmese thrown in for effect, a tribute to the area’s Lanna history. And Buddha is in the detail here. Its sheer size allows you to feel that you’ve got the place to yourselves at times – as if you were back in time, walking through an ancient kingdom. On this journey, you’ll find the handiwork of Thai craftsmen and elaborate wood carvings and etchings. You’ll also find farm houses perched on stilts, come face to face with water buffalo and have the opportunity to learn about Thai heritage and traditional arts and crafts.

And when you’ve had enough of being a timetraveler for the day, you can escape to luxury digs, with gold gilded walls perfect for any queen. And if you’re coming to celebrate something special, perhaps with a group of friends or family – you can hire out the Royal Villa, its own four-villa plot of traditional Thai teak cottages with its own private pools and jacuzzis. This is really the sort of place where you’ll feel at ease to do what you want. Be an active participant in its array of activities or be a complete spa-sloth – the wonderful thing is that it’s totally up to you.