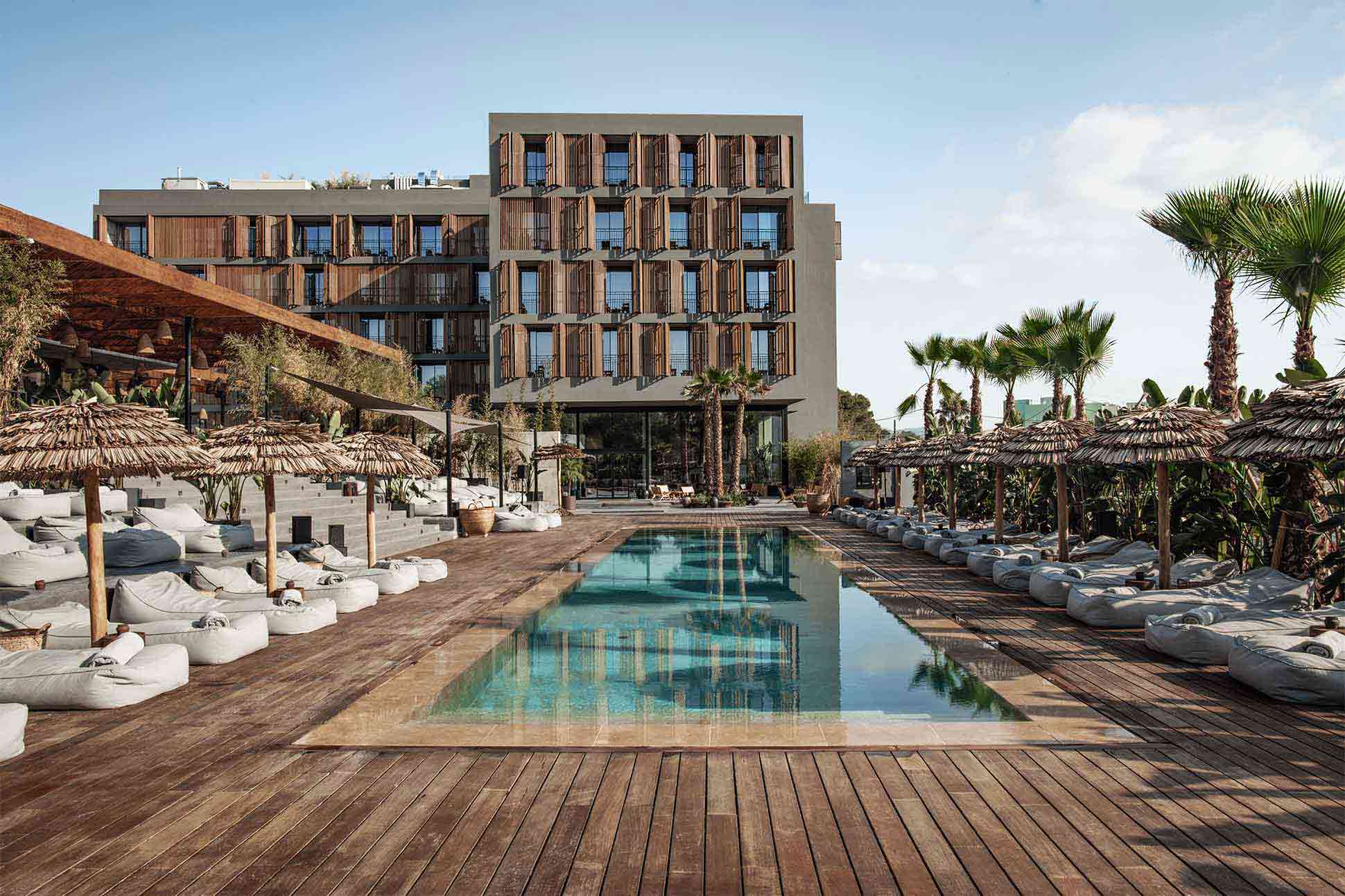 Ibiza hotels 2.0:
The next generation

With the arrival of two game-changing brands and the reopening of a hedonist hideaway, Ibiza is rising from the pandemic like a phoenix from the ashes. Along the way, the island is upgrading its hospitality scene to meet and exceed the standards of modern luxury travel.

If you’d looked at some of the world’s most beloved island destinations some twelve months ago, you’d have had an easy job pigeonholing them. Bali was cultural and relaxing, Seychelles was dreamy and out-of-the-way and Britain was, well, European. But the pandemic has stirred up travel on a global scale, and as a result, holiday resorts everywhere are looking to expand their appeal to attract new types of visitors. They all can learn from one place that’s never been afraid to code-switch: Ibiza.

The Isla Blanca is an island of many faces. There’s bohemian Ibiza, party-hard Ibiza, historic ‘Eivissa’; you name it. Perhaps more successfully than many of its competitors, the Balearic hotspot has marketed itself as a true allrounder. And Ibiza’s upcoming 2021 hotel openings foreshadow yet another way to experience the sun-kissed island; one that’s more soulful, mindful, and allows holidaymakers to walk away with the sense of personal growth – if that’s what you’ve come for, anyway. Now, we’re not suggesting Ibiza is simply whipping out a metamorphosis in response to the events of the last twelve months, but it sure is on track to reemerge with an offering that addresses post-pandemic sensitivities, inching just a tad closer to a more discerning kind of luxury traveller. Anyone else feel spoken to?

This caramel, pecan and coffee-coloured five-star bolthole featuring destination dining and the island’s largest swimming pool is sure to turn a few heads when doors open on 28 May. We hear there’ll be just under 200 rooms and suites (the largest of which spanning no less than 140 square metres), as well as a standalone four-bedroom villa and ocean-view penthouses perfectly suited for private buyouts and milestone celebrations; though make no mistake, the hotel is all about barefoot luxury! Laidback as it may be, the OKU, known to some from the brand’s other property in Kos, is on a mission to up the game around Sant Antoni: both its restaurants feature menus curated by Mark Vaessen of SUSHISAMBA fame, the spa comes with daily pilates classes and the hotel’s design rings in a new era for the neighbourhood’s pearly-white but somewhat ageing hospitality scene.

What intrigues us the most, however, is where the OKU takes its inspiration from. Rooted in the Japanese philosophy of wabi-sabi, the hotel is all about being connected to its surroundings. It’s no surprise, then, that so many of the island’s most prominent earthy colours feature throughout the property; from the ochre-brown of its craggy cliffs to the dusty beiges of sun-beaten trees. Communal spaces, meanwhile, are wide, open and allow natural light into the building. In short, the OKU introduces the kind of architectural sophistication this part of Ibiza hadn’t previously known, with the premise of delivering on top-notch luxury that’s a little less glossy and a lot more thoughtful than what one might expect on the island. We’re ready to be wowed.

Six Senses isn’t exactly known for taking half measures, but their latest development along the little-visited northern tip of Ibiza amazes even us. The brand’s first outlet in Spain, and one of only a handful in Europe, is set to be nothing short of a residential community, and dare we say a rather attractive one at that. A resort not unlike a village, Six Senses Ibiza will lure high-flying jet-setters with well over 100 accommodations set across 25 acres when it opens in the summer. In addition to beach cave suites and two fully-serviced six-bedroom mansions, the property will feature a raw food bar, acoustic music performances, yacht access and its own, private DJ – it’s Ibiza, after all!

In line with the brand’s progressive push for heightened sustainability standards within the industry, the hotel will also boast an on-site organic farm, something so wonderfully untypical for an often excessive island, we’re all for it. Guests can look forward to visiting the farm to learn about healthy cooking, gardening and to make memories with the little ones. Speaking of which, we think this is where the hotel really stands out: Ibiza’s many faces aside, family travel isn’t a box the island had previously ticked for us. Beyond the farm, transformative experiences will also be the name of the game at the hotel’s one-of-a-kind spiritual learning centre, which you can think of as an inside-out spa that goes beyond mere wellness treatments to offer holistic experiences and education on all things nutrition, sleep therapy and mindful living. Call it an upscale take on bohemian Ibiza if you must, but the Six Senses heralds a new age of hospitality on the Isla Blanca; one we can’t wait to see for ourselves.

Those looking for a Balearic getaway a little sooner will find it at Amàre Beach Hotel in Sant Josep. The property originally opened to much excitement mid-season in 2019, but it wouldn’t be until 2021 that it would welcome guests for its first full season. Doors are now set to swing open on 30 April, and the Amàre sure has used the past year to bolster its experiential offering even further (not that its location along glistening Bou Cove wasn’t enough to keep us entertained for a few days…). The hotel impresses with its wide and open rooftop bar Belvue, all set with its very own infinity pool that appears to cascade right down into the adjoining bay – add to that the island’s legendary sunsets and cocktails created by superstar bartender Diego Cabrera, and you’ve got an irresistible mix.

The Amàre positions itself as rather sexy; not in a raunchy kind of way, but its hedonistic outlook makes it unsurprising that the hotel is adults-only. What struck us as notable, however, is how the Sant Josep address pushes the grown-up theme far beyond the sun-sex-and-sangria vibes some have come to associate with Ibiza. Instead of relying on old formulae, the hotel seeks to set new culinary standards in this part of the island with the launch of Hayaca Terrace, a sophisticated dining experience that will take guests on a journey across South America curated by Michlin-starred chef Mauricio Giovanini. With so much value to add, we’re sure the Amàre will do its part in strengthening Ibiza’s presence even further coming out of the pandemic. For what it’s worth, we can’t wait to visit.