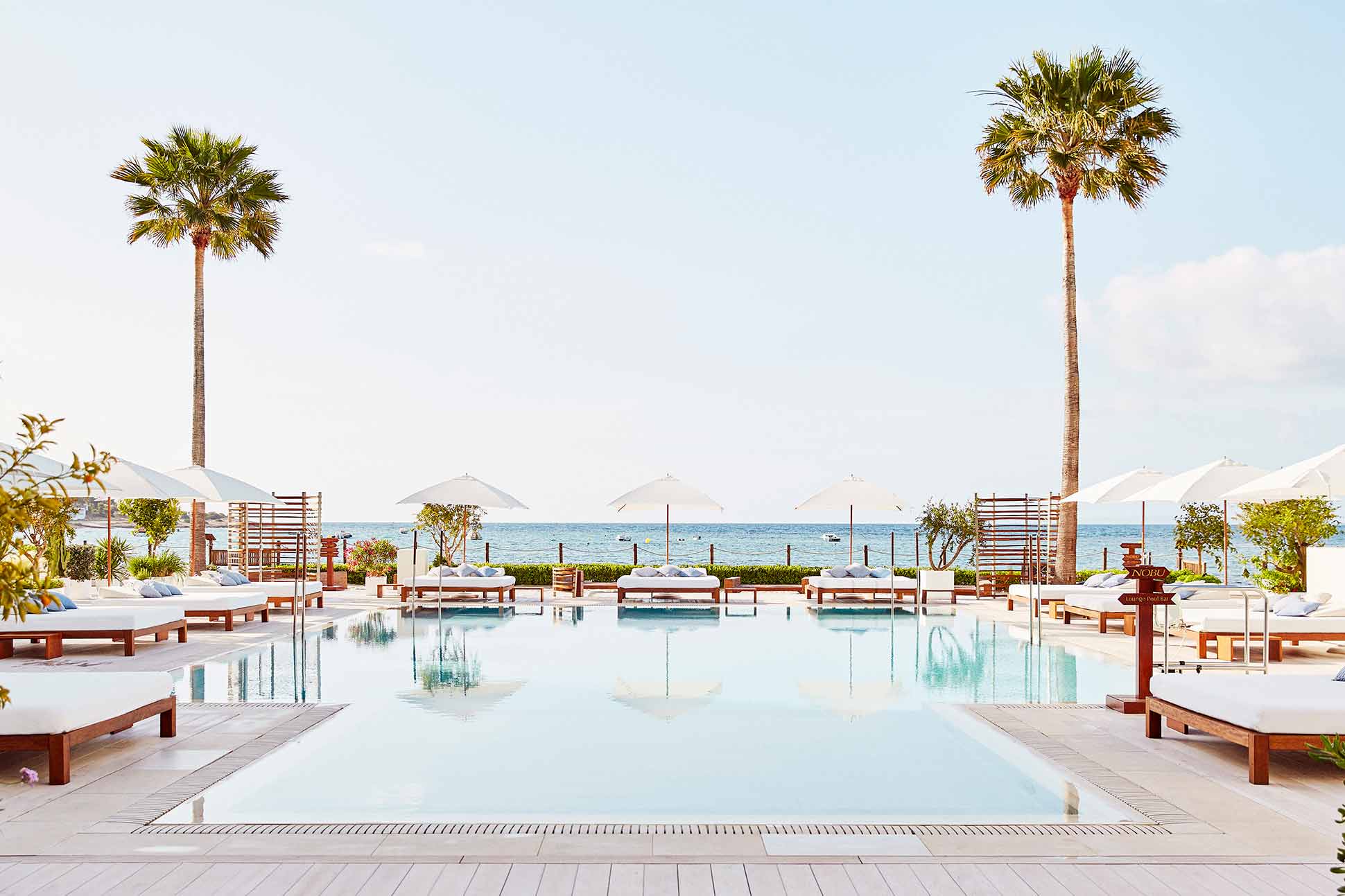 Few things say Ibiza quite like a beachside pool flanked by stylish, white parasols and the occasional palm tree swaying in the Balearic breeze. Perhaps that’s why the Nobu Hotel Ibiza Bay decided to have not one, but two pools for guests to choose from. And the theme of ‘choosing’ also runs through the property’s offering of activities, making it a ‘something-for-everyone’ hotel, and a good option for larger groups, families and everyone in between.

At Nobu’s flagship European address, the fun begins with a small bottle of traditional Ibizan liquor awaiting you on your room as you first check in. While it’s tasty, it’s hard to tell what exactly it’s made from. And that’s the point, for a note placed next to the bottle enlists all ingredients but one, challenging guests to a guessing game. It’s a playful welcome that sets the tone at this young and fun hotel, where friends come to party, couples come to unwind, and everyone comes to mingle. Nobu, co-founded by Japanese celebrity chef Nobu Matsuhisa and Hollywood icon Robert De Niro, is a social brand, of course, and the one thing you’re guaranteed upon stepping into any of their restaurants or hotels is a scene. Well, that and some rather delicious Japanese fare.

Opened in 2017, Nobu Hotel Ibiza Bay sits just 2km north of Ibiza town, with many of its 152 rooms and suites offering views of Talamanca Bay. The property’s direct access to a beach gives it an edge over some other five-star addresses on the island, especially taking into account its additional proximity to some of Ibiza’s best nightlife and cultural attractions. That said, the beach isn’t private and a stream of passersby throws curious glances at guests traipsing around the hotel’s grounds. It’s not that many holidaymakers would mind, though. With both its pools flanked by rooms and suites overlooking the action below on three sites, privacy and a sense of seclusion isn’t what guests come here for – instead, the hotel’s classic beachside resort layout gives you a chance to ‘see and be seen’. Appropriately enough, everything from sushi rolls to the obligatory Tinto de Verano is served by the pool deck. It’s all very fun and friendly… cheers to that!

Our room, meanwhile, offered a tranquil retreat from the social scene, fitted with state-of-the-art tech, including an iPod docking station and Bluetooth speakers, as well as a Persian marble bathroom with a rainfall shower and naughty shower blinds that your travel companion can open from the convenience of a King-sized bed while you’re in the nude – who doesn’t enjoy a bit of kinkiness? We also appreciated that Nobu Hotel Ibiza Bay incorporated some local flavour into its interiors. In fact, most of the hotel felt decidedly more bohemian than what you might expect from a brand known for Japanese minimalism, with natural colours and textures dominating the space, and occasional touches of old gold adding some lustre. Be that as it may, no woven lampshade or batik-print throw makes up for what we thought was a fairly narrow room with the only source of natural light at its end, where our lodgings opened onto a private balcony. The silver lining of this layout is that more rooms benefit from sea views, but for a stay longer than just a few days, you’d want to book one of the hotel’s top suites.

Whichever you go for, there are plenty of opportunities to get you out and about, exploring the property’s immediate surroundings and several points of interest scattered across the Spanish island. Concierges organise everything from private yacht charters to day trips, while expert-guided retreats at Nobu Hotel Ibiza Bay can include hiking, meditation, sunrise pilates, sound healing sessions on the rooftop and alfresco film nights with screenings of – you guessed it – Robert De Niro’s biggest box office successes. We loved this more active take on an Ibizan getaway, giving us the chance not only to experience something new, but also to do so in the company of fellow guests looking to make memories that go beyond merely taking a selfie by the pool (not that we’re strangers to that). For those who like things a bit more traditional, we hear the spa, equipped with a sauna, a steam room, and a few treatment rooms, is lovely.

You’ll also want to pay a visit the hotel’s in-house John Frieda hair salon before dinner at its eponymous restaurant, Nobu, which hardly needs an introduction. While no eatery is perfect for every kind of night, this atmospherically lit and buzzy Japanese place convinces with a wonderfully hedonistic ambiance that attracts not just gourmands but all those who want to be seen, photographed and perhaps, even discovered – it’s the kind of crowd that turns a restaurant visit into a spectacle, making Nobu one of Ibiza’s most exciting places to dine before a big night out (and you’d hardly be vacationing here, if you didn’t want one of those).

Our starters, tomato and avocado salad with Matsuhisa dressing alongside some broccoli with spicy garlic, couldn’t have been fresher or more delicious. But when it came to ordering a main, staff was utterly unprepared to make recommendations for our plant-based diet, and a seafood-heavy menu lacked clear labelling for dietary requirements, resulting in us being served a bowl of boiled rice with some cold, silken tofu on the side. While we had to laugh at this, it did mean we were forced to wait some fifteen minutes for kitchen staff to visit our table, reorder according to their recommendations (mushroom teppanyaki, fabulous), and watch our travel companion tuck into their dinner while we grew hungrier by the minute. In this day and age, you’d expect a lot better.

That’s not to say all is lost for vegans staying at Nobu Hotel Ibiza Bay. At Chambao, the property’s second restaurant, a modern take on a classic Ibiza chiringuito, herbivores get their money’s worth at breakfast. With our feet in the sand, we ordered shakshouka with plant-based ricotta cheese and walnuts and carob bruschetta with grilled vegetables before savouring our way through the buffet’s selection of artisanal, vegan cheeses. At breakfast at least, each taste was catered to very well, and, in fact, better than at some comparable places to stay on the island.

This shouldn’t come as a huge surprise, of course. Looking at Nobu’s quickly-growing property portfolio, it’s clear they’re doing a lot right. While very much a lifestyle brand, there’s more substance here than merely a good DJ and a few fancy cocktails (although they have those, too!). Contemporary design, excellent Japanese cuisine and a repertoire of activities inviting each guest to experience both property and destination in a way that’s meaningful to them, are all part of their formula for success. If you find a place that can pull off sunrise pilates and late-night dancing in the same day, and where this ‘anything goes’ take on hospitality brings with it an amazingly diverse crowd, surely that’ll make for an enjoyable holiday on the White Isle. While it’s not the most luxurious address on the island, Nobu Hotel Ibiza Bay can certainly guarantee that.