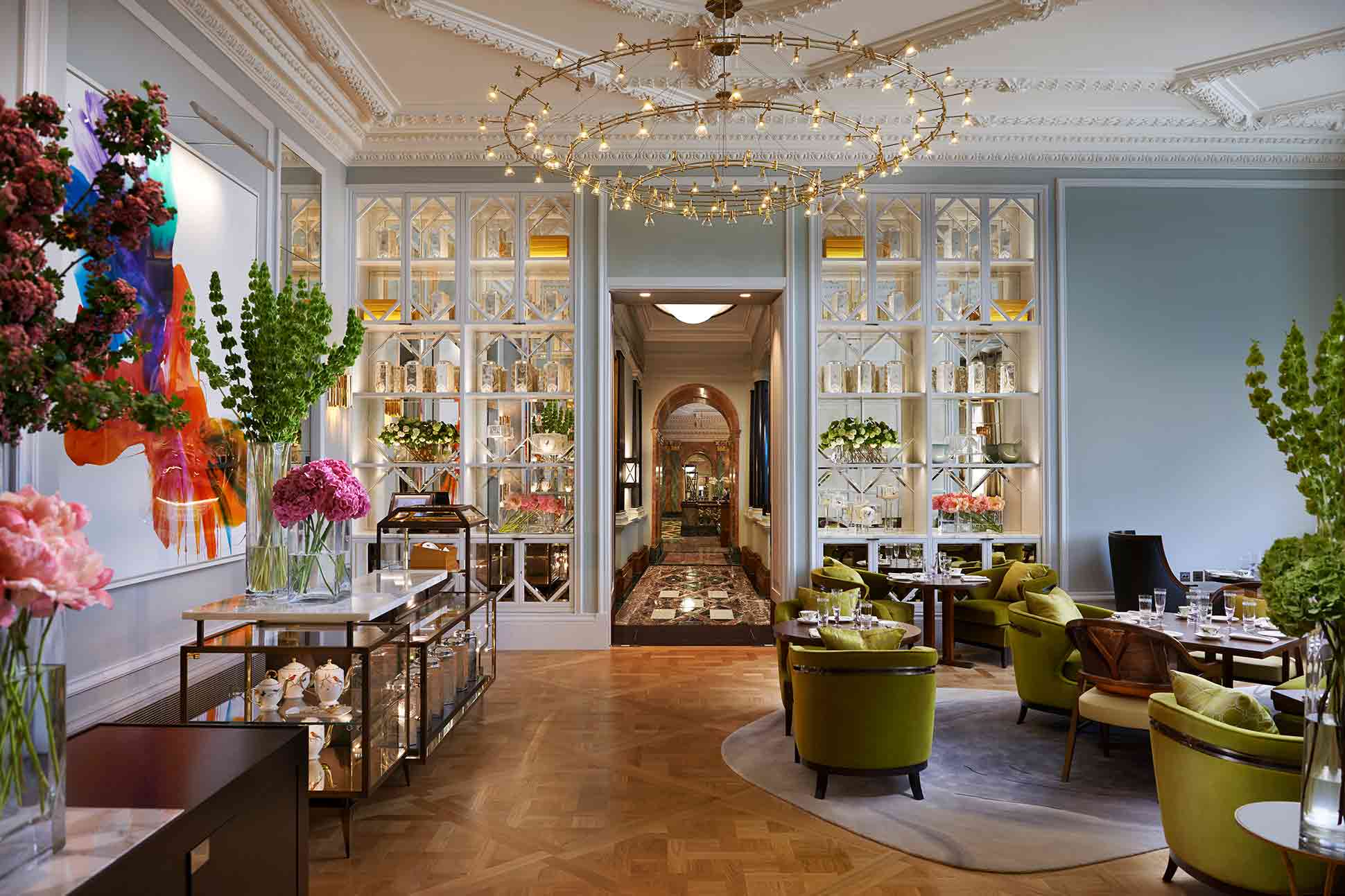 Like a phoenix rising from the flames (Londoners will know that we mean this quite literally, as the historic building at 66 Knightsbridge sadly caught fire right after refurbishments in 2018), the Mandarin Oriental Hyde Park is a luxury hotel that is having somewhat of a renaissance. The three-figure-million-pound renovation helped of course, but so did a fresh perspective; an expertly recruited, re-energised team; and a renewed appreciation for contemporary hospitality, to complement its already sophisticated duality in location – with one door fronting Knightsbridge and the other onto the Royal Park that gives the hotel part of its name.

As Londoners, we have watched the iconic hotel that is the Mandarin Oriental Hyde Park evolve slowly over time. And gradually we have come to fall for it.

Architecturally imposing from the outside, it was once known as Hyde Park Court, originally designed to meet the housing requirements of over a hundred Victorian, upper-class bachelors (who needed a city-pad but could not look after themselves without the team of servants they had back home) as their gentlemen’s club. If the walls could talk at the Mandarin Oriental Hyde Park, we’re quite sure it’ll tell you a thousand eyebrow-raising stories from those days!

The tales continued even after it was converted into a hotel in 1902, welcoming throngs of noted guests, including the Sultan of Zanzibar (and his dozen goats) in the roaring 1920s; and literary greats like Evelyn Waugh through to the second World War. The hotel continued to evolve, escalating in the 1970s when it had its last major refurbishment before the present one and beyond. Throughout its lifetime, the hotel lived up to its reputation as a world-class luxury property, although in the past known for its reserved and stiff-upper-lipped approach to hospitality. As the London hotel scene grew ever more exciting and creative, it was our opinion that the property got stuck in a time warp.

Sometimes it takes a tragedy to shake things up. Although technically, huge refurbishments and an overhaul of the facilities were already underway even before the fire. But it was the 2019 unveiling of the over £100 million budget, post-fire renovations that put the Mandarin Oriental Hyde Park back on the map for us.

During our stay, our sprawling Hyde Park Suite afforded us views over the green space that gives it its name and sense of place. By stepping out onto the small balcony, we quickly understood the prestige of the address, affording us with a ‘garden view’ of the serene royal park that was a world away from bustling Knightsbridge out front. It is so rare – particularly in London – to be able to experience both the ‘grey and green’ – the duality of metropolis and parkland in one property. The term ‘urban oasis’ is much overused when describing hotels, but it is nowhere truer than here at the Mandarin Oriental Hyde Park.

Back inside, champagne on ice and some delicious sweet-treat amenities and gifts awaited in our spacious salon and library room, complete with an open fireplace. Joyce Wang was the designer at the helm of the new suite design, bringing the brand’s (and her own) Asian influences into play – not in the Chinoiserie way that sometimes grace the chain’s other global properties, by any means … but through thoughtful application of arty, Eastern touches – to add to Western ones, not to mention an aesthetic lean to the park just outside. We liked the contemporary ‘acorns’ chandelier, at first what looks like a stylised tree branch, but on closer inspection maps the pathways of Hyde Park. It complemented more delicate touches like the hand-gilded mirror artwork and silk walls. And when we were ready to retire, a boudoir-style master bedroom and lush bathroom awaited. We enjoyed our suite, but there are even more iconic escapes to upgrade to, like the Royal Suite and two penthouses that increase both in size and opulence. For a more quirky space, check out the Turret Suite.

Service here at the Mandarin Oriental Hyde Park is exemplary, our suite came with an executive butler who showed up within seconds of us checking in, ready to cater to our every whim. And this dedication to top-notch service carried on throughout the hotel, from the on-point guest relations team to the magic-handed therapists in the hotel’s subterranean spa (look for the special elevator button and make sure to try the Amethyst Crystal Steam Room and the 17-metre twin-lane pool).

Our favourite people at the hotel though, are the ones that deal with food. The friendliness and energy of the team on the floor at breakfast-time and during the hotel’s inventive and elaborate afternoon tea (in the light and airy The Rosebery lounge), is only matched by those who lovingly prepare the food (and mindblowing pastries) in the kitchen.

By night, the Mandarin Oriental Hyde Park offers a two-Michelin-star, conceptual dining experience, ‘Dinner by Heston Blumenthal’, where the celebrity chef gives a contemporary concept to old (actually, ancient … as some of the recipes date back to the 13th century) classics. Expect new takes on dishes like the infamous ‘Meat Fruit’ from the 1500s and Salamagundy from the 1800s, in a stunning, formal-informal (as you like it) dining setting with a theatrical, open kitchen. The top table, in case you’re interested, is a ring-side booth inside Heston’s cooking lab itself.