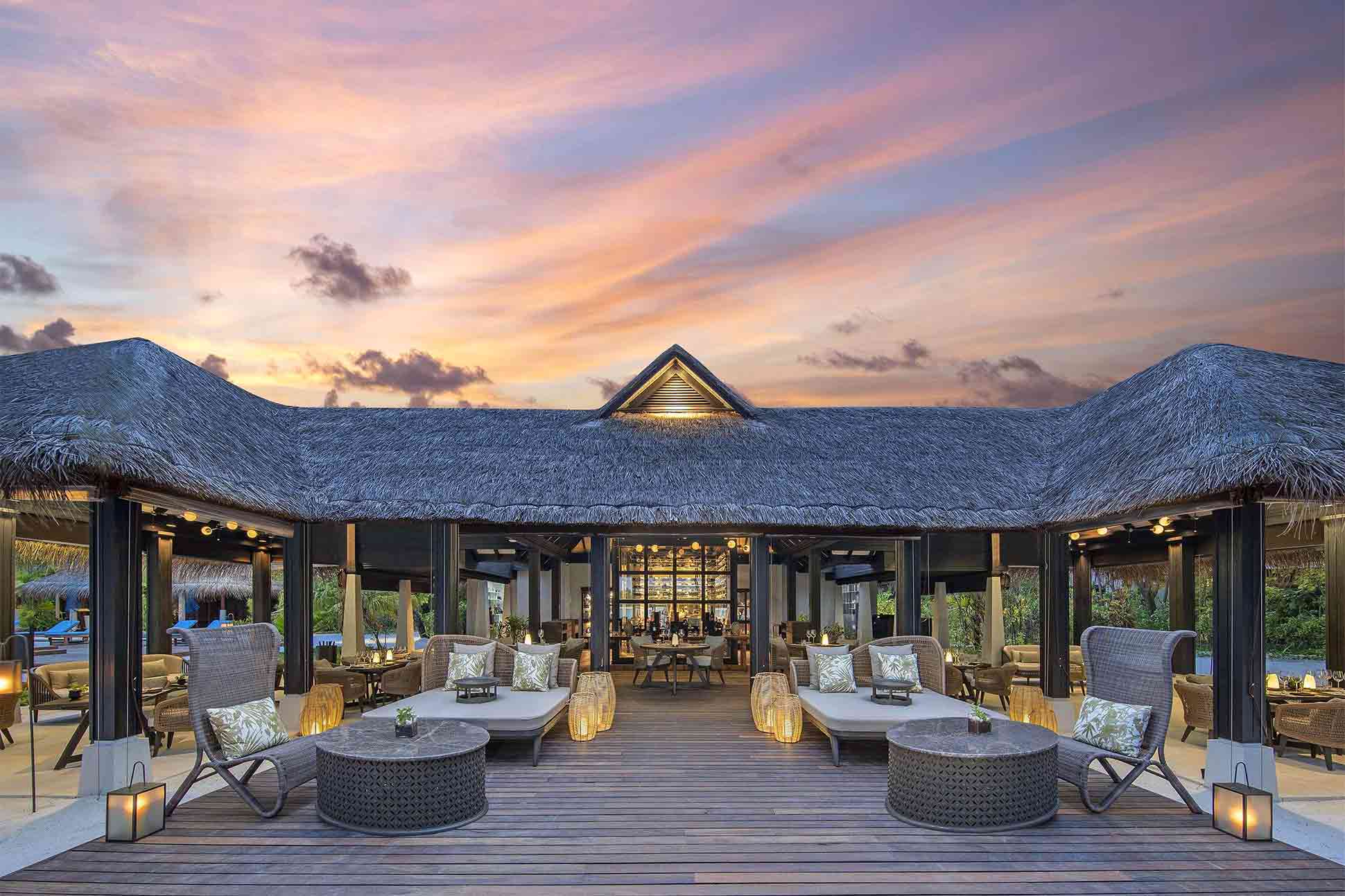 Named the leading resort in the Indian Ocean four out of five years – and among the top five best resorts in the world for two years in a row, Naladhu Private Island isn’t merely waxed lyrical about in high-flying circles, but one of only a handful of contenders globally to compete for the title of world’s single most luxurious private hideaway. Its status meant we arrived with great expectations. Question is, would they be met?

The cue is in the name at Naladhu, which translates to ‘beautiful island’ in the local language Dhivehi. Walking down the arrival pier, petals thrown at our feet and the stroke of a large gong alerting fellow escapists to our coming, we immediately realised the name isn’t an overstatement. This tiny islet in the South Malé atoll offers a quintessentially paradisal blend of colours so saturated, it’s extraordinary even in the Maldives: an aquamarine sea snuggling up against Naladhu’s ivory beach, itself backed by shrubs and palm trees juicy-green enough to have left our inner health nut reaching for the Vitamix. But before we cleared off the chlorophyll-packed flora adorning Naladhu Private Island, our personal ‘Kuwaanu’ butler handed us a young coconut – in retrospect, it was probably for the better.

Naladhu sits just across from Dhigu (which we loved) and Veli, both of which are Anantara-owned, but feel a world away despite their proximity. That’s because while Naladhu guests get to hop over to the other resorts, their own, private island remains off-limits to visitors. Accordingly, mentioning that you’re staying here during a visit to Veli or Dhigu is guaranteed to turn heads. With this added exclusivity comes a different clientele, one after ultimate privacy and the kind of service where ‘no’ isn’t part of the vocabulary. Despite this, we found the general vibe across the island to be more ‘stealth wealth’ than anything, which suited us just fine seeing our favourite Feadship toy was in the shipyard for repairs (what are the chances!).

Most of the twenty villas on Naladhu Private Island are neatly lined up along the eastern shore of the islet, with a few exceptions further inland. Having just reopened after a six-month renovation spearheaded by NYC-based designer Yuji Yamazaki, they offer a luxurious 300 square-metres of living space each, and come with private pools, steam rooms and 24/7 butler service to help you figure out the latter’s settings at 2 in the morning (hooray, jet lag!). There’s also a single 600 square-metre Two Bedroom Pool Residence, sleeping up to six, but seeing this wasn’t a family trip, our Ocean House with Pool and Private Beach Cabana, named ‘Khuredi’, after a local tree, more than sufficed.

A large turtle drawn into the sand and our name on the heavy, wooden exterior door opening up to a small patio just outside our front entrance welcomed us into the open space of our villa – the impression is one of ease of access, with all spaces connected to one another, as well as the exterior areas, via a number of doors and sliding, floor-to-ceiling windows. If you wanted to, you could literally roll out of bed and right into the pool. We found the refurbishment tasteful and sensual at the same time: rich, dark wood details and sharp edges accentuate the very generous terrace, with minimalist outdoor furniture, a giant swing-turned-bed-upon-request, and a white sun umbrella adding just a touch of St Tropez to this tiny, Maldivian isle. When we showered, our outdoors waterfall shower amidst flowering plants made us feel like we stepped into a jungle, while back inside, a subtle and soothing colour scheme with warm lights throughout made for a homely reception each time we returned from a day out… so did the constant sound of waves audible throughout our villa, which time and time again washed back up on our consciousness, as if to remind us of our tropical whereabouts.

We particularly enjoyed the contemporary interior design elements, which looked refined and chic enough not to be out of place in a Manhattan loft, without being aggressively ‘designer’. The thing with a place like Naladhu Private Island is that nothing should distract from its outstanding natural beauty, something we cherished each morning the sun rose on our faces (the benefit of a bed facing east!), and when we sat on our terrace at night, watching crabs and, on occasion, small sharks in the shallow waters below. Looking out at the horizon from here, it’s rather special to think the next land straight ahead is North Sumatra, thousands of kilometres east. Not rarely did we find our next-door neighbours felt equally far away in this edge-of-the-world location – in any case, you hardly ever see other guests on the island, which comes down to a number of reasons.

Firstly, you never have to leave your villa if you don’t want to. Any meal or massage can be arranged and made entirely bespoke to your personal preferences in-villa. Fabulously, our dressed-to-the-nines Kuwaanu butler Aslam (a veritable star, who introduced himself as our ‘personal storyteller’) would often anticipate our needs and, for instance, leave snorkelling equipment in our patio, clean sunglasses we’d left by our bed or run us a hot bath decked in petals just in time for our return from a three-hour surfing lesson. Not that you ever see your butler unless you want to; a dedicated and well-concealed staff entrance offers maximum discretion. Beyond that, Naladhu Private Island also ups the privacy factor with an all-day breakfast concept at its only restaurant, The Living Room, where the island’s limited number of guests rarely rub shoulders.

The Living Room also features a no-menu dining concept, and the talented team under head chef Philippe Wagenfuhrer certainly take pride in this: during our stay, they surprised us with a fully plant-based BBQ; think homemade soy sausages with king mushroom and chickpea steaks, alongside an Italian panzanella, slow-roasted aubergines and smoked tomatoes with umami paste and shiitake puree. For dessert, because we’ve had one too many hotel sorbets in our lives, Wagenfuhrer himself conjured up a light but creamy, avocado-based chocolate mousse perfectly suited to the tropical heat – so was the scrambled tofu ‘egg’ during breakfast, for that matter, which took us right back to Beverly Hill’s all-vegan Ladurée branch. Equally impressive in our book were innovate signature cocktails like the smoked Jungle Bird, a sexy and dark-tasting concoction made with Plantation rum, Fernet-Branca, homemade cinnamon syrup and orange bitters… though, just to be clear, we didn’t have these for breakfast!

Despite our exceedingly high expectations towards this much-lauded resort, we hardly ever found space for improvement. Admittedly, the interior of the small inland massage parlour felt a little uninspired (though our treatments were excellent), and nearby islands towards the north and west can get in between your escapist self and a sense of total isolation from the outside world. But super-luxe Naladhu Private Island achieves something different, and something rare: there’s a sense of it being a special place, that’s somehow blessed with the best of the best of Maldivian charms. Perhaps this comes down to the island’s health, which becomes apparent thanks to the sheer amount of wildlife you’ll spot within just a few hours; from lizards crawling about and birds leisurely traipsing along the beach, to cuttlefish swimming past and fruit bats gliding on a mild breeze during dinner. The island has that uniquely peaceful and reassuring quality that makes you feel as though you’ve stumbled upon something almost too good to be true – somewhere over the rainbow, a place of longing, a shangri-la, and just perhaps, the world’s single-most luxurious private hideaway.