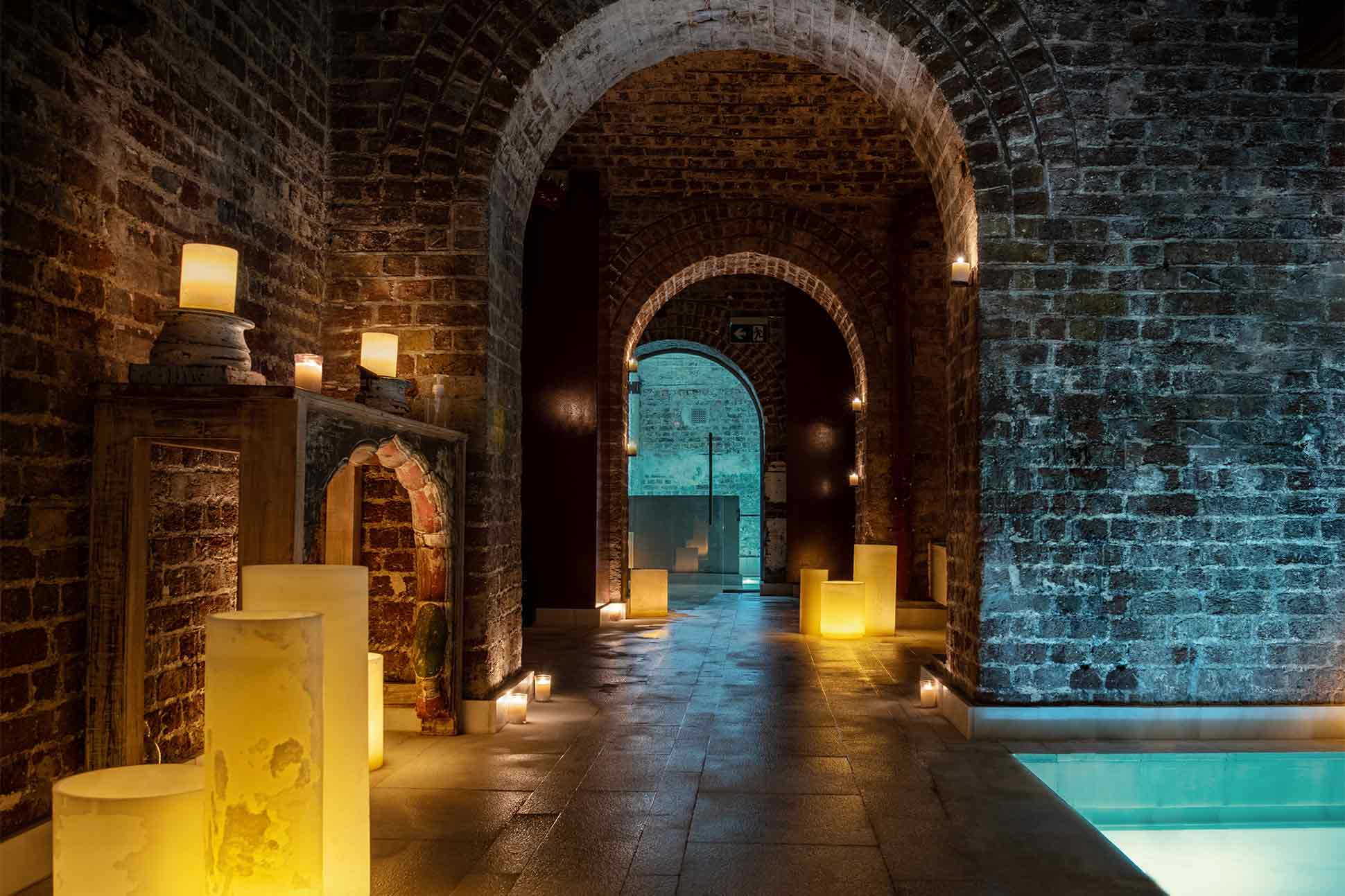 If there’s one thing we know about the British capital, it’s that there’s no lack of luxurious spas. But the just opened AIRE Ancient Baths London is on another level – quite literally, as the candle-lit pamper palace is based deep beneath the streets of Charing Cross.

In our line of work, it’s not rare to be amazed. One thing we never thought we’d do, however, is spending an afternoon soaking in subterranean pools built underneath the 18th-century home of Peter Pan author J.M. Barrie. And yet, that’s exactly what we did just a few short days ago. Going far beyond the usual wellness and relaxation theme, AIRE Ancient Baths London promises immersion in local history, with an original first edition copy of the beloved novel on display in the spa’s reception area. It’s here that Barrie would’ve written some of his most famous fictional character’s adventures, ‘as long as George Bernard Shaw didn’t get in the way’, explains the spa manager: ‘Shaw used to live across the street and would sometimes throw stones against Barrie’s window’.

Those familiar with the Spanish spa brand will hardly be surprised by the historic surroundings: AIRE’s other locations, from Barcelona to Chicago and NYC, have achieved somewhat of a cult status in their respective destinations for being deeply woven into local heritage and culture. It’s unsurprising, perhaps, seeing the wellness concept itself was inspired by the thermal bathing rituals of ancient Greek, Roman and Ottoman civilisations. The group’s eighth opening, AIRE Ancient Baths London, extends the brand’s vision across some 1,300 square metres, lit almost exclusively by means of candlelight so as to not take any magic away from the turquoise pools that shimmer seductively under vaulted brick ceilings.

And speaking of the baths, you bet we enjoyed ourselves dipping our little toes into all seven of them; from the boiling Caldarium (40ºC) to the Arctic Frigidarium (10ºC), which, after some getting used to, turned out to be our favourite by far (for an especially tingling experience, hop into the Frigidarium inside the steam room and go from feverish to frosty and back within seconds!). Another pool featuring at least 100 jets was so popular when we visited, we felt reminded of an old Sex and the City episode that sees Carrie and her entourage walk into the Grotto at the Playboy Mansion during a trip to LA. Though this seemed to be the busiest bath of them all, it still felt far from crowded and the experience overall was perfectly relaxing. There’s also the Floatarium, a soothing salt bath mimicking the weightlessness experienced drifting in Israel’s Dead Sea and a wine ritual, which includes a 30-minute soak in a 17th-century Venetian well bath filled to the top with antioxidant-rich Tempranillo – because wine not?

If it’s not already clear, AIRE Ancient Baths London offers a lot to explore, and we’ve not even mentioned our signature 60-minute massage, which was pure bliss. It’s one thing to knead our muscles the way we like, but it’s another to use every opportunity to create a calm and comforting atmosphere, something our massage therapist understood very well as he near-whispered a breathy ‘hello’ and moved around the space quietly and with great care. Still, there were a few things we’d like to see improved: missing clothes hooks for our bathrobe in the changing facilities were ever so slightly frustrating, and being handed a disposable pair of underwear in a plastic pouch not only felt cheap, but also goes against our stance on avoiding single-use plastics wherever possible (reusable cotton bags can’t be that hard to find, no?).

Overall, however, we’d say a few hours at AIRE are nothing short of an experience. The single most atmospheric London spa we’ve set foot in, housed in a historic building mere metres from the Thames, AIRE Ancient Baths London might well be on track to pioneer a new, more immersive and innovative wellness experience across the capital. For what it’s worth, we’re already planning our next visit.