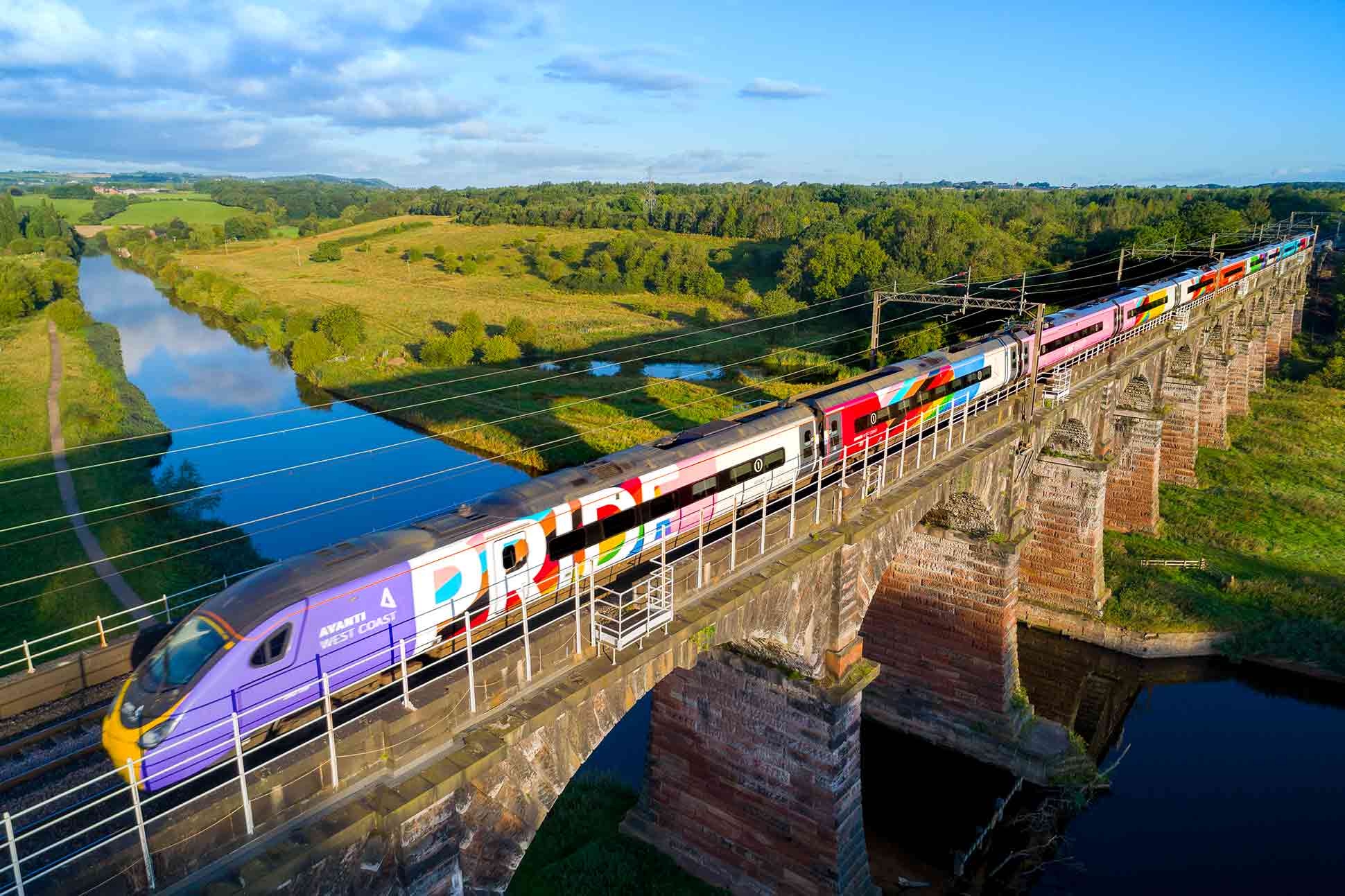 As the OutThere team heads up from London to Glasgow, Scotland aboard the super-speedy Avanti West Coast train this Pride Month, we’re reminded of the train company’s all-year-round commitment to the LGBTQ+ community. It comes in the form of the UK’s biggest Pride flag – a ‘train-bow’.

Last year, as the pandemic meant the cancellation of Pride events across the UK (something Avanti West Coast, the intercity trail operator that proudly shuttles OutThere travellers from London to destinations like Manchester and Glasgow, has long supported), they decided that they wouldn’t be beaten. Keen to show its commitment to LGBTQ+ diversity and inclusion, Avanti West Coast unveiled a rainbow-liveried version of its iconic Pendolino train, billing it the country’s largest Pride flag. For its launch, it staffed the train with an entirely LGBTQ+ crew and sent it on its journey through England, on track to spread the message of love, diversity and inclusion.

Because of the various lockdowns, we didn’t get to see the Pride train in person, so imagine our surprise as we arrive at London Euston station ahead of our jaunt to Scotland this week, to see it parked on the platform in all its glory … a 265-metre-long, 11 carriage train, nose to tail in the inclusive Pride colours – including black, brown, light blue, pink and white – bringing people of colour, transgender people and those living with or who have been lost to HIV/AIDS, to the forefront.

Every train-bow needs a name; so Avanti turned to the community for help. With 1,500 entries (“Train-bow-mac-train-face” wasn’t entered), “Progress” was chosen as a winning moniker, embodying the celebration of where the travel and rail industry have got to; and furthermore, how the LGBTQ+ community has advanced over the years, with a recognition that there’s still work to be done across the board.

The train-bow has become a permanent and eyecatching part of the Avanti West Coast fleet and can be seen darting through the countryside daily on its journeys. Beyond the activity being campaignable and creative, we think it is extremely poignant … not just because its Pride Month, but because it serves as a year-round reminder of the advancement of LGBTQ+ rights.

Moreover, we remember how fascinated we were every time we saw a train as kids. The Avanti West Coast Pendolino is a fabulous sight already, let alone in rainbow colours; but we can only imagine the discussions that families and those who see the train passing by or parked in stations across the country would have, and the impression Progress makes on younger generations, opening up the discussion about freedom and inclusion in the mainstream and paving the way for a more equitable and considerate future. Visibility has always been a key tool to LGBTQ+ progress, so we’re thrilled to see today that Progress has become key to visibility.

As for the other, less-proverbial journey that we at OutThere are making, Avanti West Coast offers up effortless city-centre to city-centre luxury travel; today we will dash from London to Glasgow in Scotland in just four and a half hours. First Class offers up wider, comfier seats with more leg room, coming with personal power points, meaning that we can stretch out and enjoy the ride and charge up our devices for happy snapping when we get to Scotland.

There’s also free WiFi, complimentary food and beverages and a lounge in the station should you have time to spare before travelling. And it’s not just Scotland it serves, Avanti West Coast offers scenic routes to other proud UK cities worth discovering, like Manchester … Northern England’s LGBTQ+ spiritual home; Liverpool, a richly historic city with a vibrant scene; Birmingham in the West Midlands, a diverse melting pot with its strong, multi-cultural LGBTQ+ community; and Blackpool … should you dare (or fancy) a little step back in time to Victorian seaside charm (think of a British Coney Island with a long and storied history of drag). And frankly, we can’t think of a better (and more sustainable) way to explore Great Britain than by train-bow.

To ‘find your Great Britain’ and plan what destinations you’ll visit on your next luxury, train-bow adventure, visit www.visitbritain.com. For its fabulous LGBTQ+ city guides, click here.