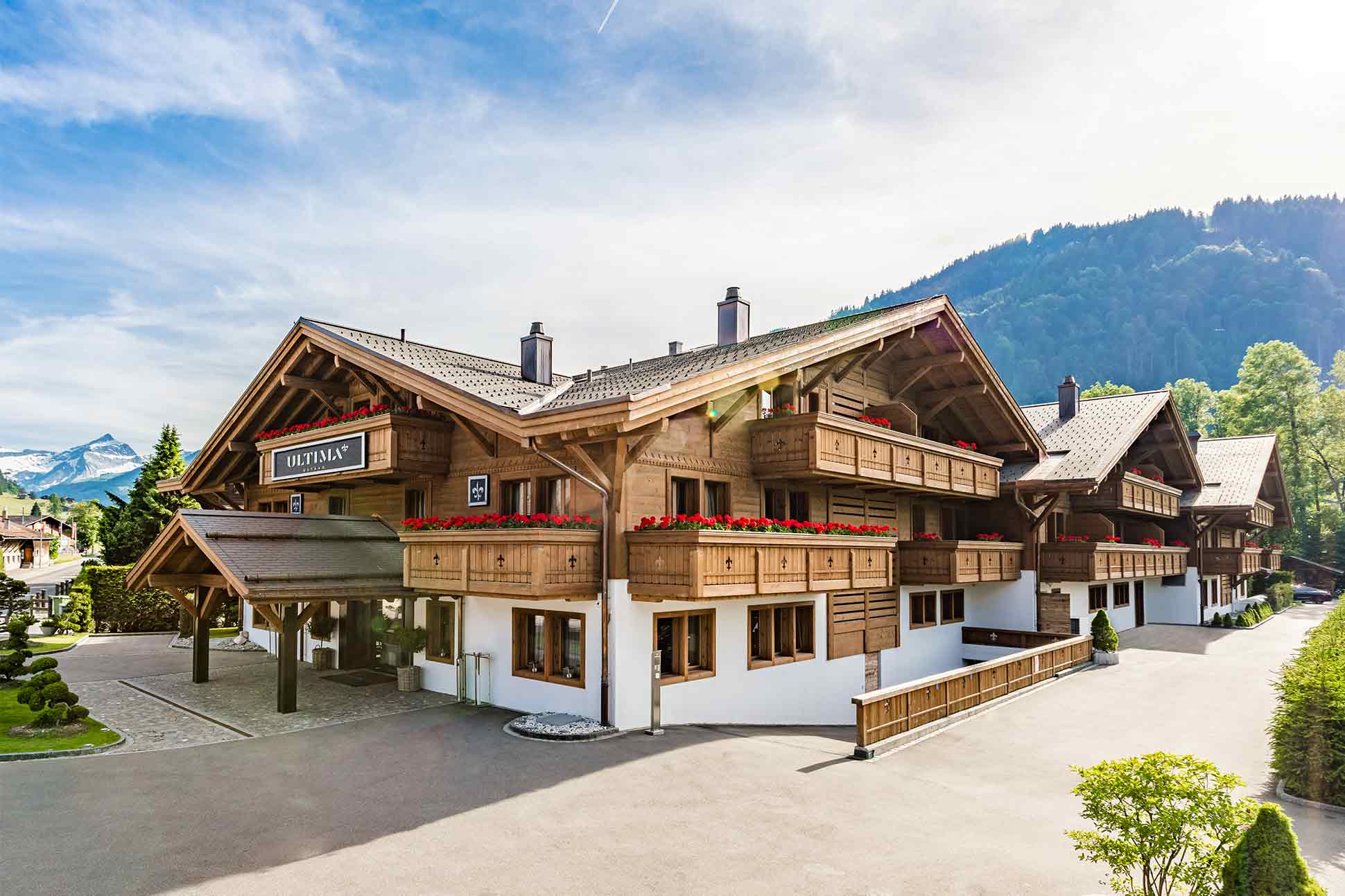 If the prospect of rubbing shoulders with Madonna and Valentino on a skiing trip over the holidays sounds enticing to you (and why wouldn’t it?), you’d be well advised to celebrate Christmas in the picture-perfect village of Gstaad – and, upon finding out you’re staying at the ultra-upscale and unapologetically lavish Ultima Gstaad, the Material Girl might even insist on partying back at yours.

Switzerland and luxury hospitality go hand in hand but the five-star superior category remains a privilege reserved for the creme de la creme of local hotels. One of these is the 2016 opened Preferred L.V.X. Collection member Ultima Gstaad, the brand’s first property, which has earned Ultima the kind of acclaim that’s enabled them to roll out a number of show-stopping, ultra-glossy private residences between the Alps and the Mediterranean in a mere five years. The hotel, spread out across three wooden chalets home to eleven suites and six private residences, is a convenient ten-minute drive from tiny Gstaad-Saanen Airport, where your Embraer Jet will rest comfortably between those of the Rothschilds and Bettencourts of this world. Though, arguably, you might find yourself in even more glamorous company at the Ultima.

Unlike local competitors, this Alpine hideaway goes beyond merely creating a traditional, Swiss hospitality experience, instead inviting guests to indulge in the luxuries of a modern, forward-thinking property: there’s a popular shisha bar, a mini-casino, Apple TV on all rooms, more art books than at your local TASCHEN store and – so you don’t burn your fingers – stylish steam fireplaces. We also loved the perspex piano and statement chandelier in the lobby, a flamboyant touch welcoming guests into an open space that extends into lounge areas, a bustling bar and the hotel’s excellent restaurant (more on that later!).

Meanwhile, our private residence was a spectacle in its own right. Starring no less than three spacious bedrooms, it also boasted a state-of-the-art open-plan kitchen and living room space ideal for an early morning cup of coffee as you watch the sun rise over the majestic Alps. Though frankly, we preferred planting ourselves on a lounger on one of our multiple balconies, with views in all directions. When the time came to bed down at night, retreating to our master bedroom felt like entering a cosy cocoon equipped with champagne-coloured carpets, BVLGARI toiletries, illuminated walk-in wardrobes and a number of quirky amenities to put a smile on your face; from faux-grizzly slippers to perfumed hand sanitiser in a flacon reminiscent of Bleu de Chanel – an Ultima Gstaad exclusive.

For a full sensorial immersion, make your way to the hotel’s spa, which offers perhaps the most bespoke treatments anywhere between Lake Geneva and the Matterhorn. We went for Ultima’s signature candle massage and cryo-facial, and were impressed with how well-rounded of an experience it was, letting us choose between a selection of welcome drinks, scented candles and post-treatment immunity boosters. A refrigerated, lemon-scented towel to help you feel refreshed pre-treatment went some way in showing that details rule supreme at Ultima Gstaad, and the spa amenities speak the same language: the sauna is glass-fronted, the steam room features generous loungers, an indoor pool boasts oversized, silver game balls and there’s an ingenious snow shower to give you an Alpine snow fix even in the midst of July.

It would be easy to spend a whole day traipsing around the spa’s yacht-style parquet floors and simply bathe in its polished-to-perfection lustre, a combination of black marble, perforated bronze and all sorts of other shiny things. In that respect, the spa is not unlike the rest of the property, shunning subtlety in favour of something we overheard a fellow guest sum up as ‘bling-bling’ vibes.

As for the artwork that peppers the space – it’s really a matter of taste. There’s no doubt that whoever curated the art intended for the works to be provocative, but we found some of the photography depicting women in various states of undress, surrounded by men in tuxedos or collaged to resemble an exotic car, misplaced. The Ultima Collection argues the works empower women, but that’s the thing about art, it’s up for debate. We’ll leave you to make your own judgement when you visit, though in any case, with Ultima’s desire for the highest degree of personalisation, artworks can be swapped out to suit your predilection.

Much more palatable was the culinary offering at Ultima Gstaad. We would’ve gladly eaten from the palm of Riad Mekroud, the hotel’s talented head chef, who traded in the Four Seasons Bora Bora for the Swiss Alps when Ultima called. Mekroud bestowed one of the best meals in recent memory upon us during a private live-cooking session in our residence – from an Asian take on ravioli to a coconut tapioca bowl topped with mango sorbet and Tahitian vanilla. It’d be hard to pin down the hotel’s gastronomic direction, an elegant blend between the world’s most delectable cuisines, executed with such attention to detail that even an avocado toast for breakfast was almost too pretty to eat (but not quite!). Similarly, service throughout our stay was dressed to the nines, ever-attentive, always smiling and yet perfectly discreet. We barely noticed them, in fact, if it hadn’t been for our drinks being magically topped up or doors swinging open without us having to say a word.

There are more reasons to wax lyrical about the Ultima Gstaad, although the world’s fun-loving glitterati have long been convinced. Whether or not Madonna herself has Vogue-d through the hotel’s front doors, skis on one arm and a boy toy on the other, we weren’t able to find out. Not that you needed her to get the party started.

Photography by Igor Laski and courtesy of Ultima Collection