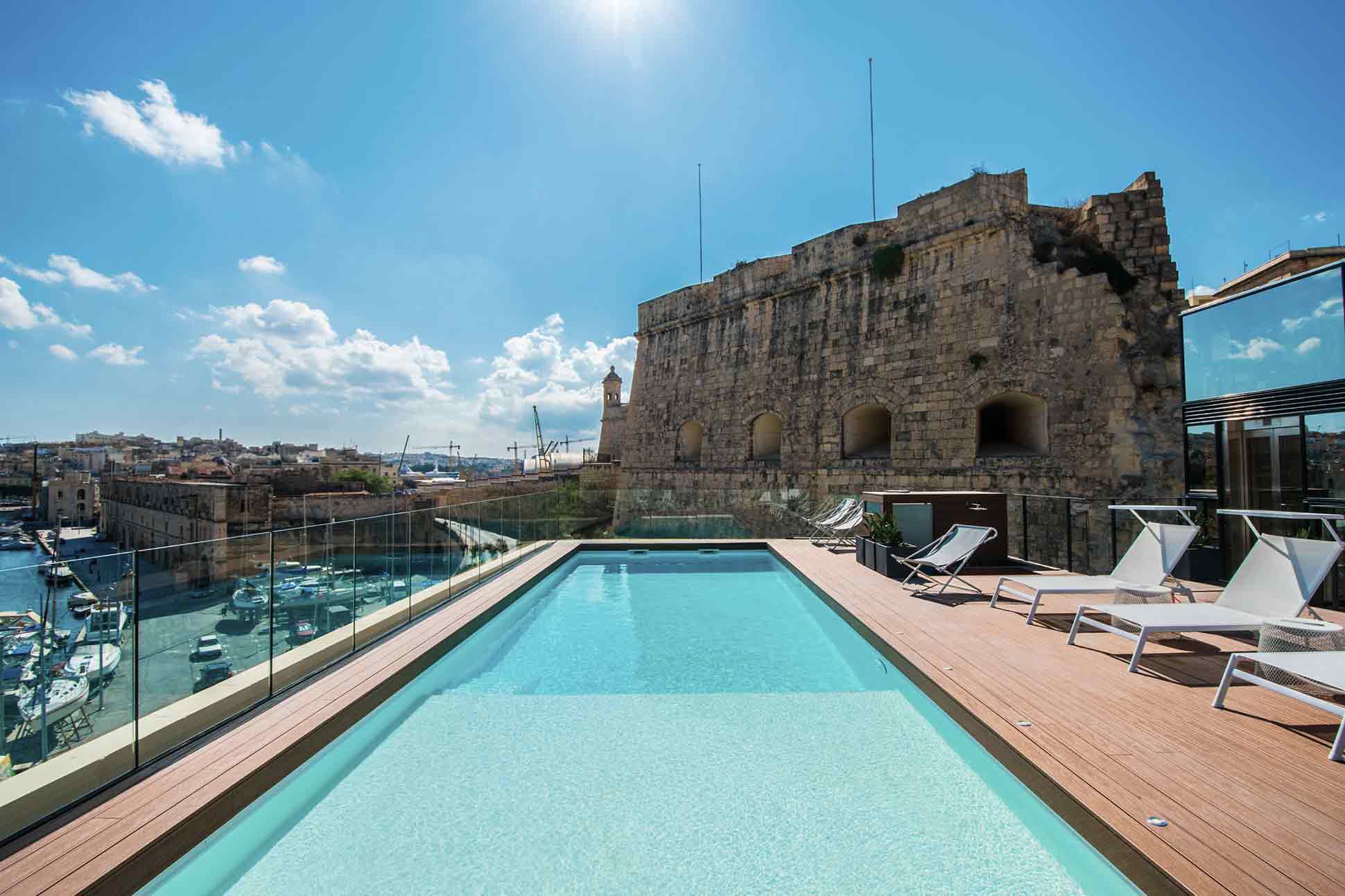 If the old fortress walls of the rapidly up-and-coming Senglea neighbourhood of Malta could talk, they’d call out to sea to echo our recommendation to stay at its contemporary meets ancient design hotel, the Cugo Gran Macina Grand Harbour.

Set in a medieval boat de-masting shed that dates back to 1547, this surprisingly contemporary design property successfully merges old (ancient, in fact) design and architecture, with the new. We’re coining it ‘medieval modern’.

The minimalist design of the Cugo Gran Macina plays on that juxtaposition rather well. Black stone, dramatic modern stairwells and theatrical lighting are used in contrast to the heritage limestone to create a visual spectacle. Modern, designer furnishings in neutral tones and gallery-worthy snapshot-in-time photography of old Malta complete the theme.

Our first-floor suite was enormous, boasting a lounge/dining room and separate master bedroom overlooking the superyachts docked in the marina, to a similar, minimalist theme as the common areas of the property. Being a lower-rise property, you have to crane your neck to get that quintessential view of Malta from your room, but then again, once you’ve gawped at the panorama from the rooftop pool deck here, any other view pales in comparison. Sipping cocktails from this absolutely sublime rooftop swimming pool, we also drank in the view of the Three Cities and majestic Grand Harbour.

Like many heritage hotels in Malta, no two rooms are identical as they had to build around preservation orders (one also has to appreciate that the construction of the Cugo Gran Macina took an astounding 17 years). So, there are some suites that are duplexes with mezzanines, presenting a cosmopolitan and urban apartment vibe, yet abounding in period features like original limestone ceilings, tunnels and archways. The downside is that you’re literally breathing in history in these spaces, the limestone is prone to erosion and hence it flakes, so for those with allergies or aversion to dust on your luggage, opt for a room with a new ceiling.

Breakfast takes some time in the morning, so allow for a leisurely one or more time if you’re planning to head out to explore (and you should). But by evening, the same dining area turns into the lauded Hammett’s Macina restaurant where the super knowledgeable and efficient Mark, Nena and the team expertly guided us through locally inspired cocktails and delicious, inventive Malta meets Middle Eastern fusion food.